I have done this exercise on a smaller scale for my Art Seminar class. We were asked
to choose an artist we loved and another we hated and then present the reasons why.
As I have stated in a previous post on this topic, it is much easier for me to choose
an artist I love. I am not comfortable saying I hate any artist, with some exceptions.
I think this belief is based on my personal opinion of the individual rather than the artist. Hate is not a word I'd use loosely to describe my opinion or feelings toward any person or artist, art. The reason being I believe there is usually some thing I can find to appreciate about all people, art and artists alike.
After some investigation about this, I had to ask myself what I consider as being my own definition of art, what good art is and what would I dismiss as being bad art.
I have long been a admirer of Sir Ken Robinson and I strongly align myself with his
ideas and perceptions of what creativity is. Getting hung up on semantic attempts,
to define the word art and artist is really of little interest to me today. It's been an
ongoing historical discussion in the art world and though I do think it can be a useful discussion from time to time and one that we as artists, at some point need to have
if we are seriously going to pursue the life as a creative person and/or artist.
Sir Ken Robinson states, " Creativity is the process of having original ideas that
have value". He says intelligence is diverse, dynamic and distinct. I would purport
that creativity and intelligence are directly related. We all have an intelligence
and an emotional quotient.
So how does this relate to hating an artist? It doesn't for me, other than I can't
truthfully say I hate any artist. There are definitely some I prefer and
like more than others, simply based on my opinion however there is a certain
standard that I would think comes into play here, because at some point we all
make judgments based on some kind of standard imposed personally or externally
from some kind of institution or ideology.
I did a, "what is bad art" google search and came up with this site MOBA, There's
some pretty rough looking art in this collection. Would I call it art to hate? It's all
a matter of opinion. 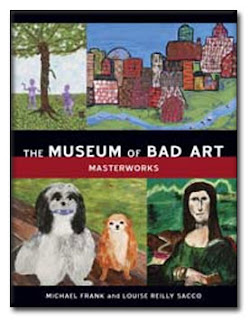 Is it bad art? According to the museum, yes it is bad art.
Choosing art that I "hate" would depend on the "artists' intention. Suffice to say
discernment needs to be used objectively and subjectively, in balance one with the
other. If the artist intention is an evil one, I would say it's bad art. Hitler was an
artist and even an accomplished artist but was an evil and deranged human.
I do believe artists have a certain responsibility to be socially conscious and even
a moral responsibility to his or her own personal integrity as an artist and human
being with empathy for humanity, and I think this is often reflected in their art
practice. I think this makes for good human beings and more likely good artists.
That said, I am beginning to dance around naming the five artists I "hate."
I don't hate any of these artists but there are particular things I don't like about them or the art they make and for a variety of reasons , some similar and some different for each artist.
Damien Hirst
I did a presentation about Damien Hirst and why I did not like his work. I found
him to be more interested in art as a commodity, as opposed to the creative process
and this I find very unappealing and self-serving.
His obsession with death creeps me out and his dead animals in formaldehyde
sicken me. The fact that he had next to no involvement with the actual construction
of his work doesn't impress me much.
His early work I did not like at all however considering he was under the influence
of alcohol and substance abuse, this contributed to his flippant and arrogant attitude, though not an excuse, I do take it into account. He has returned to painting and
figurative work which I find more appealing and the fact that he appears to be
doing the work himself is commendable.
Gary Kennedy
I once read in a book about Garry he said he believed in nihilism and he described this as being his philosophy toward art. This I find very troublesome but not terribly surprising as
I read that Garry has a persona that referred to him as being the conceptual guru.
I suppose because I was inundated with conceptual art at NSCAD, all through the
70s. I was not ever a fan and I am perhaps somewhat cynical about the whole movement.
I felt the baby was thrown out with the bath water, and I was one of those dissenters against, " a small cadre of conceptual-art enthusiasts who resisted the re-emergence
of painting," that Sherri Irvin speaks of, in her article, Garry Neill Kennedy, No More

boring Art, from Canadian Art magazine July 30Th 2002, though I do very much appreciate the contribution Garry Kennedy made during his 23 years at NSCAD.
Here is an interesting segment from Sherri Irvin's article.
"Those who speak reverently, even lovingly, of the Kennedy era recall his tremendous capacity
for bringing people and circumstances together to let great things happen. But others remember
the Kennedy regime, run by a small cadre of conceptual-art enthusiasts who resisted the
re-emergence of painting and drove out dissenters. Kennedy seems perplexed by the latter
point of view. He was admittedly forced to make tough decisions after the faculty unionized in
1986. But flexibility was the linchpin of his administrative strategy. He has his views about teaching,
he says, but he had no desire to impose them; at most, he would "make sure…there was lots
of room" for his own approaches. As for the college’s artistic direction, he denies having attempted
a conceptual-art stranglehold. His ambitions for NSCAD were drawn from the ever-changing art
world, not from preconceptions about either art or education. "A lot of people think that schools
are about teaching, teachers and students," he says. "And I think they’re more than that."
The point was to support art in all its guises, especially by stimulating the new work of established
artists. He knew that if NSCAD was an exciting place, the benefit to students would follow. Since
1990 a professor at NSCAD rather than its president, he still believes that "you’ve got to keep
charging the place, pumping it up."
These artists are my first two out the list of five. I'll continue this tomorrow.
Two down three more to go.

Michael Snow considered himself misunderstood by the public and his critics. He was considered provocative but some, choosing random subject matter, transforming art objects, regardless of what medium he used.

Many artists are misunderstood, nothing new, however some artists perhaps intentionally keep the public confused or don't feel the desire or obligation to inform their public audience. This is a personal choice, however if an artist does not make any effort to explain their art practice, I would conclude chances are, the audience will be confused and not comprehend what the art is about, or the artist's perspective.

I don't live in the artist mind, God knows, I have a hard time to live in my own mind. I do very much appreciate an artist making an effort to clarify the ideology and reasoning behind the art. When this does not occur, art and artist are misunderstood leaving the audience to fill in the blanks usually based purely on a subjective opinion alone.

Michael Snow was an artist of the 50s and 60s generation the decade that provided many artists a way to re-evaluate traditional ideaologies and discourse. The artist now had the opportunity to re-define and reconstruct their own art.
In his reading " A Lot of Near Mrs." he does little to clarify or dispel what he he considersed misconceptions regarding his work and his intention. It could be said, he was simply being provocative playing devil's advocate, regardless I don't think this was helpful to any one but Michael Snow.

I do appreciate and recognize Michael Snow's ideas and contribution to conceptual art and the art world generally, I just not one of his fans. I think he lived too much in his head had others do his work and most of his work leaves me cold.
Posted by Unknown at 4:55:00 PM