"Hope For The Hopeless" 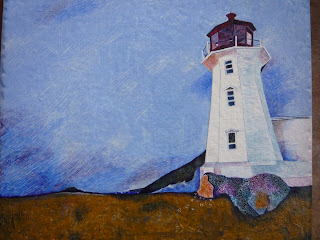 I just finished my second commissioned painting of another lighthouse. The process of completing this painting was what I described as being, a spiritual experience, because of the state of my mental health over the past few weeks, which have been somewhat challenging, as I was feeling anxiety, stress and some depression. Fortunately for me, these episodes never last long, and things always get better.
I have often thought about mental illness throughout the years, because I was personally affected by it at a young age in my own family. Being a recovering alcoholic I have had my time of mental illness, or me being out in orbit, as I call it.
Lately there have been several items in the media about the treatment of those affected by mental illness and how it is often stigmatized, cloaked in shame and fear.

Many of my loved ones and close friends that experienced mental illness where hospitalized, imprisoned, or tragically succumbed to suicide.
My loving, tenderhearted, creative, and late husband, whom I met in Toronto at the Young Street Mission, an outreach for street youth, was a writer. He lost his battle with schizophrenia at the young age of twenty six in 1980. He had been diagnosed at sixteen years of age. Through out his young life, writing had always been  his solace, his refuge and light during the storms of his life, that helped him find his way.
I have always been very grateful for having creativity to be the same for me, whenever I experienced times of depression or grief. It is a powerful healing balm for the spirit.

I am not usually a person likely to post recent bills passed in the government halls of the Canadian parliament, and then write in a blog post expressing what I think about them, in relation to how they affect me or others. I am going to take exception to this because it has been weighing on my heart and I felt compelled to share my thoughts, and experience.
Recently I read an article in the National Post where the retired Senator and past chair of the Mental Health Commission, Michael Kirby addressed this issue, where he expressed that the mental health system is turning prisons into the 21st century asylums for those suffering from mental illness. Michael Kirby himself was personally touched by the death and suicide of his own son, and who suffered with mental illness. Undoubtedly I'm certain this experience caused him to become a dedicated mental health advocate.

Having worked with many youth at high risk in care, with a myriad of mental health and addiction issues, I've seen how many of these youth fall between the cracks, as a result of insufficient support and treatment available to them and their families. So often these youth go on to adult correctional facilities. As a volunteer in provincial prisons, I have met up with some of these same youth, I once worked with, in open and closed custody, years prior to them becoming adult offenders. I attribute their incarceration directly to the lack of support and treatment available to them as youth and children and for their families.


Bill C-54 will directly affect how those with mental illness are perceived and the increased amount of time incarcerated when criminally charged.
The Schizophrenia Society of Canada has spoken out about the proposed changes in this bill and I believe addresses many important factors and concerns.

I am happy to see more people, especially in the public eye, speaking openly and candidly about mental health, as it has been long over due.  It gives the much needed hope for those of us affected by mental illness and for a world so in need of hope.
I am reminded of a time many years ago when I went into a local coffee shop. There was an endearing young punk rocker behind the counter waiting on me. He was wearing a button that said, " Hope For The Hopeless". I thought to myself, thank God for that and that will be my mantra!

Today I found an interesting article from  the Agora Art  blog about why entering an art competition can help your career.
I believe some art competitions can be seen, as being counter-intuitive and counter-productive to creativity.

As a person who has been involved in the art education of children and adults, I have been of the same opinion as, Viktor Lowenfeld, the father of art education. He purports is his book, Creative and Mental Growth that forced art competitions, based on outside standards as opposed to natural competitions, do little to encourage or foster the nurturing of creativity in children particularly. The reason relates to an externally imposed standard which exists and arises from those who are judging the art and not based on the individual's standard and achievement. 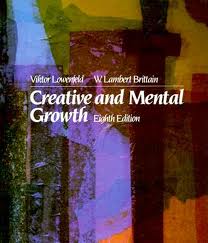 Having said this, as adults we are in control of what we decide to expose ourselves to within the already highly competitive art world. A balanced and tempered approach to art competition can have positive affects on reputation,  on one's artistic career, and may give artists cause to evaluate their own work and goals. I think most artists eventually learn to do this regardless, especially if they have been immersed in an art education and academic environment, such as Fine Art program within a university.
Competition can be positive in the right context, and we all have to decide for ourselves precisely what is relevant to and for us, within whatever context we choose.
Posted by Unknown at 6:25:00 PM No comments: 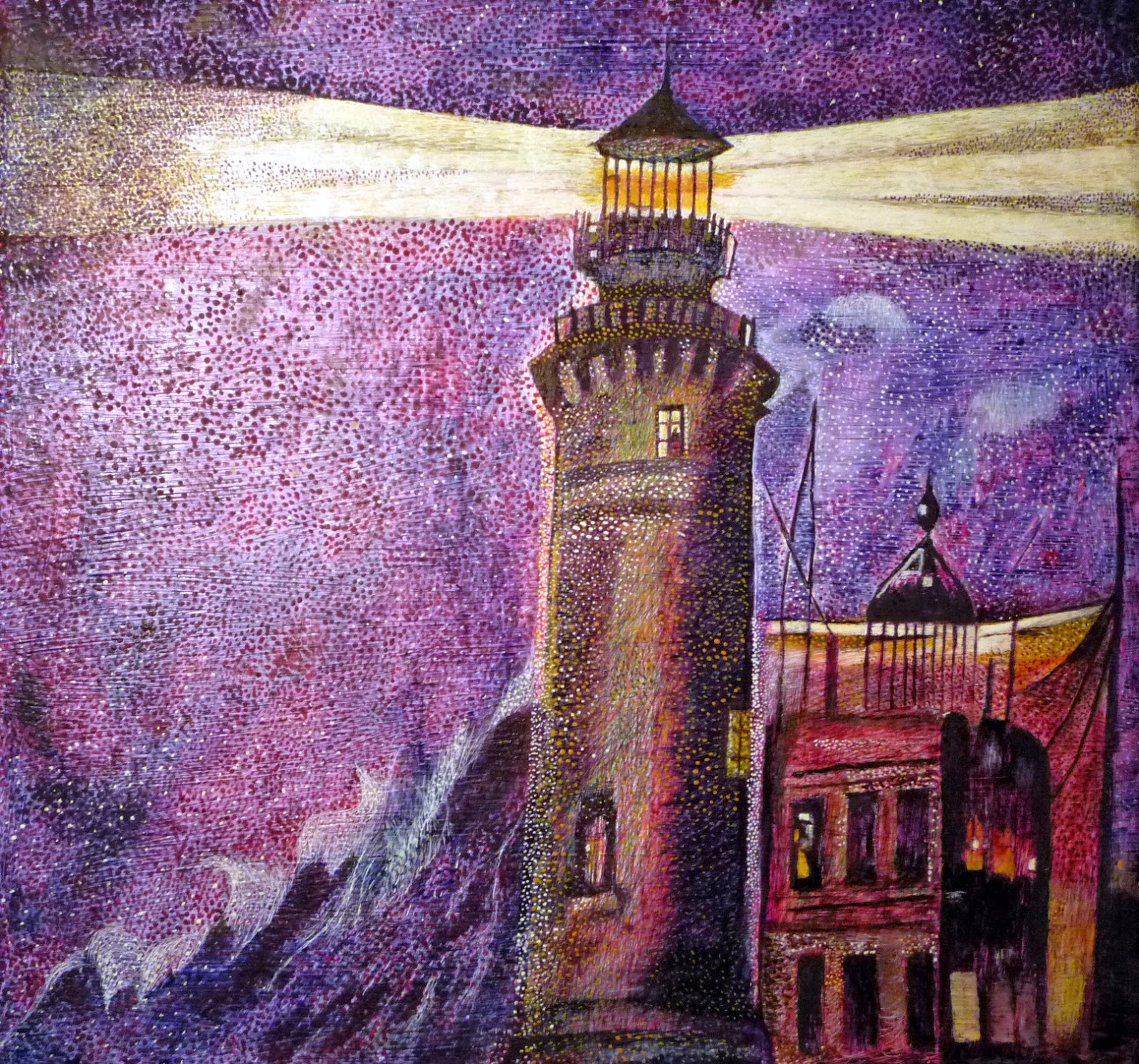 I can remember as a young girl our family would make the long and arduous car trek from Toronto, Ontario to Nova Scotia, every Summer. My father would always track down a lighthouse somewhere, and we could go inside the lighthouses that were never locked. We would climb up the spiral rot iron staircases, in awe and amazement, I'd inspect the monumental and magical glass light, that was rather like a huge prism. This experience was one of my treasured memories of childhood.

The commissioned painting I just finished, I think helped me to recapture this memory, captured, and stimulated my imagination. While painting this rather Gothic like scene, I imagined what it would be like to enter the lighthouse.  It was a meditative, reflective and positive experience. It transported me to another place, in my mind subconsciously.

In mid January, I was asked to write about my art work, and so I have been doing this in a separate journal. I thought perhaps I would feel differently about my commissioned work, as opposed to my own personal art work and subject matter but I have found out that I don't, though, in the past I might have. Regardless, now I don't believe there is a difference. I would like to explore this further.

I've been in a very reflective state since December and have come to a decision through prayer, journaling and discernment. I'm not quite ready to talk about this presently and well because I want to go to bed after a long day of painting my lighthouse. I see this painting as a symbol of my own discernment and the light has helped me find my way.


“Lighthouses don’t go running all over an island looking for boats to save; they just stand there shining.”

The Open Mind - Artist On Fire

My apologies to my followers and readers for not having posted as of late.
I really dislike not being regular in more ways than one. Without going into lengthy complaining and explaining, I will say it's good to be back after having internet issues.

So with the Christmas break I took time to do some knitting, crocheting, reading, and have started some commissioned paintings. I also have begun to discern the direction I am headed in my creative life journey.


I just finished reading, The Open Mind - Exploring the 6 Patterns of Natural Intelligence, by Dawna Markova, PH.D. This book was quite interesting, very  informative in examining our conscious, subconscious and unconscious mind.

I am also described as being a KAV: Kinesthetically Smart, Auditorily Centered, and Visually Sensitive. Easiest Way to Learn: Experience/Hear/See. Easiest Way to Express: Do/Say/Show.These learning patterns are very useful in being aware of how they enable understanding and perception of myself and others.

The other book I am about half way through is Jane Lind's, Joyce Wieland Artist on Fire. It's a riveting read, and have found out that Jane Lind writes about women artists. She is a wonderful writer and also is an artist/sculptor. It is always with great interest and pleasure, when I find out about woman artists. I am enjoying Jane Lind's book immensely, and enthusiastically look forward to reading her blog. I also look forward to continuing Artist On Fire. Joyce Wieland has always been one of my mentors.

" Joyce Wieland gave us dreams. Jane Lind has gathered the "stuff" of these dreams to weave a tapestry rich in the colour, texture, and creative strength of creative passion that was Joyce Wieland. "
- Mary Pratt 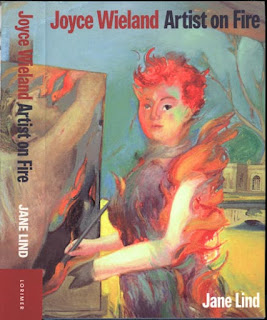