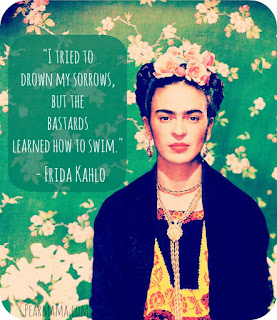 I unexpectedly was unable to post my blog today because the power went out this morning and did not come back for nine hours. I also had an very unexpected visit today from a very dear friend whom I have known so many years, and we'd both lost track of how long it has been since we have seen one another.

She is really my soul sister and we have shared many thoughts and feelings over the years.
As well would we both attend a very special and I think sacred gathering of woman that are deeply connected and these gatherings are embedded in my psyche.

After she left and I returned home. The power still being off, I decided I would go to the local country store and write her a long letter, in reply to the one she actually started  to write me in December 2014. While we were at the beach having a picnic she said she had started a letter and handed it to me before leaving today.

In my letter I shared with her about the book, The Heroine's Journey. We have both in our own way taken this journey whether we knew it or not struggling with loss, finding our direction and strength though weakness which resulted in us becoming better human beings.

Today July 6th is the late Frida Kahlo's Birthday. She is, I think, my favourite artist, because she is one of my favourite human beings, and I feel also a soul sister, so whenever I have a reason, not that I need one to write a post about her, I do.

I found the video below, of actual footage of Frida today. I may have seen it before, but it doesn't look so familiar.

More than her work I so admire Frida Kahlo the woman, for her inner strength and her humanity. If there was ever an artist I wished I could meet it would be her.

I long to some day travel to Mexico to see  The Blue House (La Casa Azul) and Museo Frida Kahlo.

I have to make an addendum to this post regarding the quote below that was attributed to Frida Kahlo on GoodReads. It is in fact not Frida Kahlo's quote, but from a good friend who is an artist, and a writer. She was 15 years old at the time when she posted it onto another site, postsecret.com and she found her quote being used on the GoodReads site, not attributed to her, but to Frida Kahlo. Rebecca Katherine Martin is a highly gifted, intelligent individual, and I know she is a fan of Frida Kahlo's

It some how makes this quote attributed to Frida Kahlo more meaningful, and simultaneously undermines it's meaning because it is untrue, Frida Kahlo did not say this. The statement is a powerful one that obviously  readers strongly identify with, perhaps not because it was thought to be what Frida said, but because the quote was said by someone who is a deep philosophical thinker now, and then, when it was written by that 15 year old girl, Rebecca Katherine Martin, who posted her thoughts many years ago. It's meaning  comes shining through, resonating with those whom have felt the same, like Frida, and like Rebecca.

"I used to think I was the strangest person in the world but then I thought there are so many people in the world, there must be someone just like me who feels bizarre and flawed in the same ways I do. I would imagine her, and imagine that she must be out there thinking of me too. Well, I hope that if you are out there and read this and know that, yes, it's true I'm here, and I'm just as strange as you." - Rebecca Katherine Martin

Here is Rebecca Katherine Martin's response to this misquote attribution.


So, in one of the weirder incidents of my adult life, a short plea that I wrote on a postcard at 15 is now widely attributed to Frida Kahlo. The quote reads:
"I used to think I was the strangest person in the world but then I thought there are so many people in the world, there must be someone just like me who feels bizarre and flawed in the same ways I do. I would imagine her, and imagine that she must be out there thinking of me too. Well, I hope that if you are out there and read this and know that, yes, it's true I'm here, and I'm just as strange as you"
I pasted these lines of text onto a ripped magazine clipping of Kahlo, and mailed the postcard to PostSecret (http://postsecret.com/). My little image was at the top of the blog one Sunday, and the girl that I was felt a glow of solidarity. Not so alone. The comments were so kind, I think I still have them saved to my computer.
10 years later: I have changed, the internet has changed. I am scrolling down my facebook feed when the very words I wrote as a 15 year old appear before me, attributed to Frida Kahlo . I google the quote and I come up with this:
http://www.goodreads.com/…/402640-i-used-to-think-i-was-the…
There are 1676 people on GoodReads who think that Kahlo said this. There are also memes, handmade drawings, & what looks like text in a magazine. If you search "Frida Kahlo quote" on google, this quote is one of the first items of text that appear.
A) I have always wanted a quote on GoodReads, but I wanted to actually write a book first.
B) While flattering and amusing to me, this miss-attribution speaks to a serious lack of inquiry as to where our information comes from online. And I think that this is important. I cannot pull down those memes one by one and tell each of these people - "Look, actually you have a totally WRONG idea about Ms. Kahlo. That thing that you think she said was written by a dopey teenage girl from Markham, Ontario."
This is one minor instance of something that is endemic. I can't make anyone take more care in the ways that they absorb information, take truths for granted, and then further disseminate those distortions. (Re: Vaccines)
I will take this as a reminder to be more careful myself about attribution and context.
Sorry for the little rant, I mainly meant to say:
lol
&
wtf

I imagine at sometime in our lives, we all feel like that last quote of Frida's that you posted. We wonder if there is someone who feels and thinks the same as we do. It makes the world a less lonely place to realize that yes, I am not alone!

So true Bev. I sure identify with this quote. I added this quote after my post, as I had just found it. Really resonates with so many of us that have felt that we don't belong, and are alone.

Hi Catherine, thank you for clarifying this and kudos to crediting your dear friend Rebecca Katherine Martin. I am an artist and was looking for the source of this quote I painted for a gallery exhibit honoring Frida Kahlo. Now that it seems very apparent what you say is true because I could find no bonafide reference from Kahlo's written work of this quote My painting will now be called. Rebecca Katherine Martin. Thanks again, best wishes to you both.

I will certainly pass on your remarks onto Rebecca. She will be very pleased as am I!