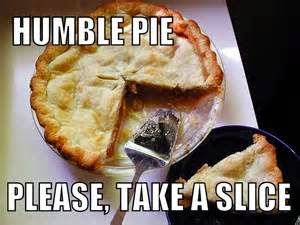 I called my good friend tonight around 7:30 p.m. I told her about a situation that had taken place earlier today. I then said, I was going to have a late supper, and that wasn't really hungry, because I'm eaten a lot of humble pie. We both laughed, but what I was talking about was serious business.

Later in the afternoon I dropped into a friends, who had done me a very big favour. We talked about this and he relayed in so many words he was hurt, because I hadn't thanked him. My generous friend, was right I'd over looked thanking him, and now I really felt like shit. It wasn't my intention to not thank him, but as they say, 'the road to hell is paved with good intentions.' I apologized profusely. I asked if he would accept my apology. He said yes he did. But as I left, walking back to my car, with my head hung low, it just didn't feel right. I felt horrible, even though he'd accepted my apology.

So many times I think for most of us, it is easy to focus on how we feel unappreciated and maybe we are, but how often do we tell  or show others how much they are appreciated. Sounds easy enough, but seems like humans find it a hard thing to do, and easy to overlook or forget about. Not a good default!

On the way back home, I thought I have to give him some art. Something that kind of hurts to give because it is cherished. I just wanted to try and make it right again between us by showing generousity, in the same way it was shown to me. When I got back home, I removed one of my paintings from the wall, in my studio, that was from a series I'd done a few years back. I am quite attached to as it has a lot of personal meaning to me.

I then immediately headed back over to his house again to present him with my painting. I was certain that he would accept and it was going to be his, and this would make us both feel better. He'd already had one of my paintings, and he is a great lover of art. But he refused to take the painting I was offering him! I pleaded and practically begged him. I wanted him to know that I really appreciated what he did, and for all that he does to help people in our community. Nope, he was not going to take it. He'd made it clear in making the the point, that all he'd wanted was a thank you , in others words to feel appreciated. He said he wasn't looking to be given anything, and stated that I should be selling my art work, not giving it away, and that I shouldn't have to do this. He said he wasn't going to take my art work when he thought I could sell it. I tried to explain that a wanted to give it too him, and it wasn't because I felt I had to give it to him. He became even more adamant, and I could see he was not going to accept this painting. What was I going to do now?

Most artists have a hard time selling their art. When you can't give it away, well that's not such a good feeling. However, under these circumstances, though my good friend wouldn't accept my painting as a gift of appreciation, he knew, because I'd made the offer that my apology and appreciation was indeed sincere, and heartfelt. This seemed to make all the difference to both of us. It was a beautiful feeling.
We both went away feeling better than any material gift would ever make us feel. I'd say my friend and I both received two gifts, that of appreciation, and especially the most precious gift, was that of friendship.

Besides the lesson of humility, I learned another important lesson from my friend. Never assume that someone knows you appreciate them, tell them, show them. Never assume someone knows you are sorry, tell them, show them. Appreciation comes in all forms, and it comes in the form of a simple word, that should never be overlooked. A heartfelt, thank you.
Posted by Unknown at 10:54:00 PM

I think sometimes the people we are closest to, who mean the most, are the ones we more often forget to say "thank you" to. I know I'm guilty of it!

I think you are right. It's easy to take advantage.
Strange you know the night before I had a dream about the friend I'd hurt. I think it was my unconscious trying to remind me I need to thank him! Never dreamt about him before. He is my fourth cousin, but I can't say we are best friends but I do really appreciate everything he does. I was really short sighted rattlin' around in my own head and not living in my heart.