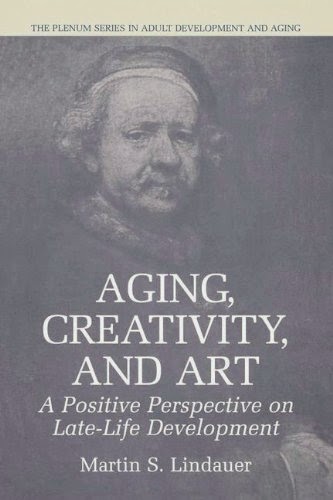 Reflecting on what it means to be an older artist, I have never worried about my age, which I think is an attitude of agelessness, which I am grateful to have inherited from my parents.

Having returned to University to finish my degree at 56 years of age, it would have been easy to give up on my dream of obtaining the Bachelor of Fine Arts I had started so many years ago in the early 70s. Though I certainly had my challenges, and struggles to overcome, I never seriously considered throwing in the towel, regardless of how difficult my situation was from time to time. It all just made me even more determined in wanting to fulfill this goal, as it was what I was passionate about.

The fact that I was 56 when I became a mature student, and graduated in at the age of 59 never felt like a disadvantage, but an advantage, because I wasn't distracted, and could focus on the tasks at hand, more so than when I was much younger art student.

I know there are many artists I greatly admire, whose art is just as compelling, if not more so, once they had matured in years. Some of these artists I know, and are my personal friends.

Recently I heard of a book written by Martin S. Lindauer, entitled AGING, CREATIVITY, AND ART, A Positive Perspective on Late-Life Development.
Lindauer, states that research indicates creativity increases in quality, and in quantity, over an artist's lifetime. Productivity peaks age 60, and the quality of the creative output remains constant and steady, well into age 70 years of age.

Artist's who create work well into their 80s have a quality of work rated higher than it was during their 20s and 30s.  Lindauer purports that there are seven characteristics that distinguish "old artists and late art from young artists and youthful efforts."
When the so called "Old Age Style" might emerge, Lindauer wrote, "...the 60-year-old artists, and many of the 70-year-olds who were studied, were 'too young' to have an old-age style."


I especially admire those women considered the Grand Dames Of The Art World.

I have no "Old Age Style" but I intend to age creatively, and gracefully as an artist with an attitude of creative agelessness.