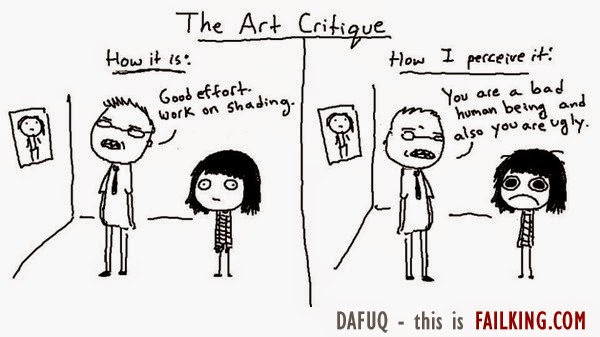 As an art student who attended NSCAD in the 70s, and then again as a mature student at Mount Allison University, I learned to develop a thick skin, not too thick mind you. As well, I learned not to be so precious about my work, or about my 'feelings'.  I put my big girl dress on, with big bloomers too!

Everyone wants and needs a certain amount of recognition, but ultimately we have to be our own fan, and have the conviction to believe in our work, and be able to carry on a discourse about what we are doing. If you don't have the confidence, no one else will either.

More or less, my 'give a shit' stopped working some time ago.

I admit, I'm not that familiar with many so called professional art critics, as I really don't take them too  serious and will call them the art gnostics and they take themselves too seriously. There is however one I like a lot, Jerry Saltz.
He's down to earth, shoots from the hip, cuts through the BS, and most of all he has a great sense of humour. I think besides the fact that Jerry Saltz is no intellectual slouch, he is so down to earth and was once a working stiff, a truck driver. You can't get much more down to earth and unpretentious than that. His truck driving career makes him a one of a kind art critic.

Here's a great interview that was done in 2008 Irving Sandler from BrooknRail, had with Jerry Saltz. It gives you good overall impression of the man. Of course I'm sure he isn't every one's cup of java, but he sure is mine.

Here is an article from the site Skinny Artist that gives some thoughts how to deal with creative criticism.
Posted by Unknown at 6:05:00 PM