Today I heard interview on CBC Radio, Information Morning, with Gary Neill Kennedy , the past president of  NSCAD. He has just released his recently published book, The Last Art College - The MIT Press
Listening to Gary Kennedy talk and read, I felt nostalgic for those days during the early 70s at the Nova Scotia College of Art and Design. I also felt proud to know I was a part of this great school during this time like no other.

Perhaps because it was that particular period in history, when so many of us were questioning the meaning of art and that significant sociopolitical changes within the world where taking place, this translated into our art making and greatly contributed to the iconic myth of the 70s, that was and is still very much NSCAD.

I don't know if we didn't make any more boring art, that the great John Baldassari had students write out on the walls of the Anna Leonowens Gallery , but the Art College was definitely not boring. It was one of a kind experience, where you could make any kind of art, our imaginations were unlimited and the relationship between faculty and students was egalitarian. You knew your professors and they knew you by name. 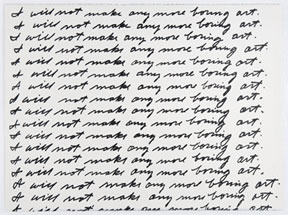 When I first started out in 1971- 1972, the "Art College", which it was mostly referred to back then, was located on Coburg Road, in the large four story Saint Andrew's United Church building, before we made the big move to downtown Halifax, in 1978.  It was an intimate space, with a tight knit community of artists and  about 600 art students. I missed out on this protest by three years!

I remember the first day I walked in to the building, having so much anticipation, nervousness and excitement . I knew it was going to be something special I would remember for days to come .

You never knew who or what you were going to see or do and that made it very exciting. It was the best of times and the worst in many ways for me, but I don't once ever regret my four plus years there. I learned an immense amount, had some incredible teachers, wonderful life long friends and memories. I met some great artists and saw some great art.

Feminism, The Second Wave, was at it's height in the 70s and most of the female artists there had a fight on their hands. It was an education in and of itself! 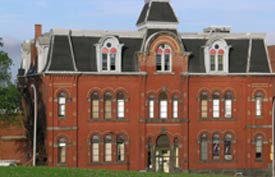 I like to believe that the passion and commitment we all felt toward art is still a deeply embedded within NSCAD students, the historical walls, beyond buildings and conceptual or traditional art but is an essence and spirit that continues to thrive not in spite of, but because of our NSCAD history. 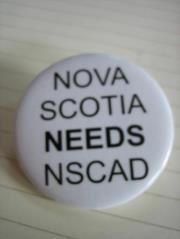 Sadly I am afraid NSCAD is under threat and may very well be the canary in the coalmine in a culture obsessed with money. Lets hope not and if so we need to know Nova Scotia needs NSCAD.