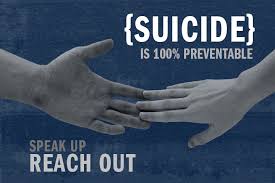 Recently I became aware of the grassroots community organization called CAST ( Communities Addressing Suicide Together) when attending and co-facilitating a segment on creativity, within a day workshop about Self-Care. This lead to learning about an internationally recognized program called Safe Talk, which is an educational training program that addresses some of the reasons behind suicide and what we can do to help others and hopefully prevent suicide.

Having been a Youth Care Worker for over 20 many years, I've been deeply touched by suicide working with youth. As well, I've personally experienced the loss of loved  ones who have taken their own lives. I've also seen the change that can be had by taking a proactive interest in encouraging youth to express themselves in creative ways and having someone present in our lives that we can trust to care enough to listen to what it is we are are saying especially if we're having thoughts about suicide..

Of course there is never one sure reason why someone would take their own lives. But one thing is sure, we can never prevent suicide by not talking about it, and talking about suicide doesn't cause people to commit suicide. THIS IS A MYTH!

I was disturbed to learn that within our educational system throughout our Cumberland County, Safe Talk is prevented from being presented to students over fifteen within the schools. I've been thinking about this in the weeks that followed after taking the three hour Safe Talk training in my rural community, and it has weighed heavy on my heart ever since.

And so today I decided to see what I could find in regards to why and if there was some sort of critique about the Safe Talk training, in order to determine for myself if these criticisms are founded, substantiated, and why. These criticisms of Safe Talk in my opinion, don't make sense to me.

It parallels a scenario that I'm reminded of, when I was working with youth at risk in the city, and there public was an outcry in an article written in the paper by a conservative religious group. The person who wrote the article strongly implied, if sex education was brought into schools, suddenly it would result in youth proceeding to engage in sex. This attitude was completely unfounded and not based on common sense or reality, no matter how well intended.

The link below is addresses the criticisms about Safe Talk.
https://www.suicideinfo.ca/responding-critique-safetalk/ 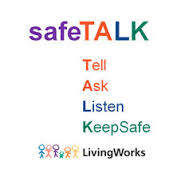