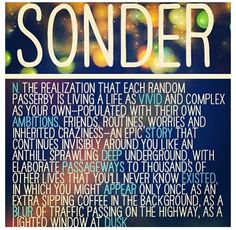 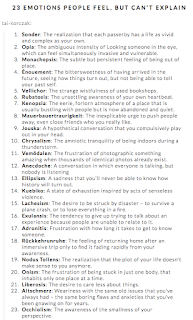 The above photo of this list of word definitions I saw today, shared by a friend, and is from Graphic Designer John Koenig's site and I love this descriptive name, the Dictionary of Obscure Sorrows. Each word he's invented and derived etymologically from several languages and it a sort of mash-up of jargon that actually means something. I would never remember most these words, but I certainly love and appreciate John Koenig's very creative efforts to invent new words for feelings and emotions we can't explain with our standard present day words.

I'm sure the grammar police will not be happy about this, but language is forever actively changing, like people and can't nor should we attempt to contain or relegate them into one specific meaning. Language is a living thing. New words are always being invented and added to dictionaries.

I don't remember a time when I didn't love words and language. I find them all fascinating and I don't really know a whole lot about either other than I did study linguistics one semester as an elective in order to fulfill the requirements of my Bachelor of Fine Art degree.

There were many things I loved about linguistics, but I was really was pretty hopeless at figuring out all the basic semantic linguistic formulas. That was brutal and soon became what I call my nemesis. I passed the course by the skin of my teeth, but I'm so glad I took it, after learning so much about what it means to be a human being. I think linguistics is something every one would benefit from studying.

When I was a little girl, maybe about 6 or 7 years old, I watched a T.V. show on old our black and white, during the early hours of the weekend mornings, when every one else was still in bed. The show featured a what appeared to me, as being the perfect family living in Paris and so of course they only spoke Parisian French. I had no clue what they were saying, but I loved to listen to them speak, imagining what it'd be like to live in beautiful Paris as part of this family, speaking such a beautiful language.

I attribute my love of language to my mother, who faithfully completed a difficult crossword everyday from the newspaper. We both had a love of words and some of our favourites  being, milk toast, lugubrious, balderdash and ort. I'll never forget that one, meaning food morsel, I learned from my mother. It's a great word for playing scrabble.

When people would mispronounce words, this was a real bugaboo for my mother and she was always quick to correct, not anyone else, just me. I appreciate that she did do this, because I became conscious of the words I used to express myself. Mispronunciations quickly became my bugaboo over time. It doesn't bother me now, especially after studying linguistics. I do however take note, but certainly refrain from ever correcting anyone, which would be just plain rude. I'll leave that up to the annoying grammar police, that drive themselves mad with perfectionism.