A Moveable Feast - Running From Crazy 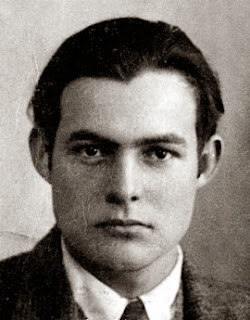 I finished A Moveable Feast, by Ernest Hemingway this week, and happily returned it to the library. It wasn't anything like I thought it would be. I expected it to be full of scenes, situations, and conversations among writers, and artists in Paris, during the 1930s. It was rather dull, and full of descriptions of drunken episodes, and I really don't remember a whole lot else about it except his friendships with Gertrude Stein, and Scott Fitzgerald. As well, the description of how he lived so poorly in Paris with his wife.
Perhaps my expectations were just a little unrealistic.
That said , I don't doubt Ernest Hemingway's creative ability to write, after all he did recieve a Noble Prize for Literature, and the Pulizer Prize for Fiction. He was indeed a very creative man, and I think especially, when he was sober and well.

Being a recovering alcoholic myself, I found as was reading his book, I was becoming preoccupied with how many times Hemingway talked about drinking, and what he was drinking, in each chapter, and page. I was beginning to think I was counting the times booze was mentioned, like the way a family member of the alcoholic is always preoccupied with how much the alcoholic is drinking. This is due to my own past obsession with booze, and other people's drinking, which I often take note of. It's why I became a member of Al-Anon in 1988, I was addicted to the alcoholics in my life.

Truthfully, I didn't find the writing in A Moveable Feast engaging. It impressed me as being disjointed, perhaps because it was a sketchy memoir, that was put together three years after his death.

I'm certain his writing was affected by his alcoholism, his bi-polar mental illness, and his experience in the war, which I'm certain left him with post traumatic stress.

Hemingway interests me more as a person, than as a writer, not in spite of his troubles, but because of them.
I will attempt to read another one of his books in the future, but in the meanwhile, I'll finish off my books by Eudora Welty and Walker Evans and James Agee, Now Let Us Praise Famous Men.

Today I listened to an interview with Ernest Hemingway's granddaughter, Mariel Hemingway ,which was very interesting and very hopeful. A testament to how we can change our lives. I am very happy that she has been able to turn things around, and breaking that cycle of illness and addiction by speaking out.
I hope I the chance to see her film, Running From Crazy.
Posted by Unknown at 10:07:00 PM