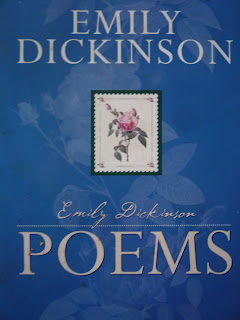 Many years ago I was given this beautiful hard cover book of poetry, simply titled, Emily Dickinson POEMS, broken down into a series of "Books".  I admit I'd never read any of her poetry prior to receiving this book, that reflects her loneliness, her passion for nature, love of language and life.

She was greatly influenced by the Metaphysical poets of 17th century England, and engaged in her own personal search for spirituality. Reading her poetry did give me some sense of who she was, but I think Terrence Davies film, The Quiet Passion, soon to be released, is sure to bring Emily Dickinson's personality to life.

In reading her poetry I do get some sense of who she was, but truthfully I can't say I fully appreciate or even understand many of her poems. Though she was considered a modern poet of the 19th century, I find much of her writing rather difficult to relate to. But then there are some that resonate and touch me, especially her poems about nature.

At the front of this book she wrote beautifully in 1890:

"THIS is my letter to the world,
That never wrote to me,
That simple news that Nature told,
With tender majesty.

Her message is committed
To hands I cannot see;
For love of her, sweet countrymen,
Judge tenderly of me!

The BBC review of the film by Mark Kermode's really conveys his contagious enthusiasm for Terrence Davies portrayal of Emily Dickinson, and makes me very excited to see it. I'm one of those who's never heard of Terrence Davies until listening to an interview with him today, which I thoroughly enjoyed.