Are We All Off Our Nut?

You know the kind of day you have, when your mind feels like it's on tilt, your half off your nut and the world's off it's axis? This is the day I had today.

I was feeling gray in spirit and the out of doors matched my insides, that is until I made myself get outside and dig in my garden for an hour and a half.
It's been said that the antidote to worry and/or despair is action. It's true.That's what I did today and I felt better.

Right now the world does feel like it's gone wonky and it's difficult to shake of the those feelings of worry and dispair.
I listened to a great interview today with the writer George Saunders who talked about war, love and the presidency and he said something funny, but it was a simple, succinct and a truthful message, that really struck me, because I understood what he meant and I was glad he said it. He said that America was violent and stupid. He quantified this by saying that he wasn't meaning everyone in America was violent and stupid, but there's been a history of a general fraction of US society that has long been this way.

A few days back I heard another interview with Robert Reich on the CBC program Ideas, about the rise of the anti-establishment. It was also a simple, succinct and truthful message. Hands down the best synopsis I've heard about the US and what is happening there with the Trump administration in the mists of post truth, fake news and alternative facts, and thinking that's anything but critical.

"It is a deep tragedy, bordering on calamity, that we have come to this point," says Robert Reich of the Trump presidency. In a lecture at the University of British Columbia, followed by an interview with Paul Kennedy, the former U.S. Secretary of Labor and Professor of Public Policy at University of California at Berkeley details how understanding the circumstances that led to the election of Donald Trump can help shape a new democratic political sensibility."

It's not all doom and gloom. This too shall pass. There is hope, if we can put that antidote to worry and despair into action. 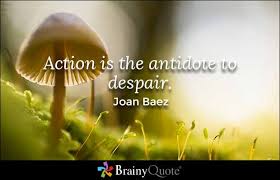