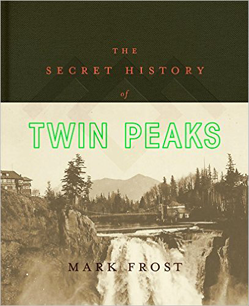 I know Twin Peaks has a cult following and I confess I'm a full fledged member. When the show was on several years back for a very short period of time, I faithfully watched every single episode. I was fascinated, entertained, mesmerized by Twin Peaks and was so disappointed when it ended. I felt like so many, I was left hanging and Twin Peaks was never to be seen again. Not so!

I'm absolutely thrilled it's returning in the new year, and I'll pick up just where I left off, never missing an episode. I can hardly wait!
When I think about what it was that I found so compelling about Twin Peaks, there are several aspects of the show that captured my attention. David Lynch for one, and all the actors appeared to be carefully hand picked, and I loved them all. But Mark Frost? Honestly? Never heard of him until this past month. What an interesting guy. Now I have my Kobo on the go, I'll be reading his books!

All these years later, I now understand what it was about Twin Peaks that completely captured my imagination. The power of story and mystery.

I heard Mark Frost on CBC this morning. He stated that the heart of life is a mystery . Oh boy my ears perked up real good. I heard him briefly speak a few weeks ago talk about Twin Peaks, and made reference to archetype and Carl Jung, but today when I listened to this full interview I got a clearer in depth understanding about mystery and why shows like Twin Peaks have such a following.

After visiting Mark Frost's site I found this even more in depth explanation about writing, story telling, archetype, mystery and how these help us to find meaning in life. He makes reference to Joseph Campbell, and I'm certain eluding to the Hero's Journey which of course immediately makes me think about Campbell's female counterpart Maureen Murdock and her book The Heroine's Journey.