One of my earliest memories growing up in a musical family, was sitting with my parents, my brother, together with my grand parents, in their living room listening to Boogie Woogie  on old 78 records. It was a special kind of experience for a kid, and it was one that has stayed with me my whole life.

Having a brother ten years older and born in 1943 meant I was exposed to all the 50s music, and the dye was definitely cast without me really knowing it. This meant I heard Jerry Lee Lewis, Bo Diddly, Little Richard, Chuck Berry, Bobby Darren, Buddy Holly, Dion and a whole lot more Rock and Roll. Later my brother's interest in country and blues music directly and deeply continued to influence my love of music especially everything there was to know and learn about blues.

Last night I heard one of the very the best interviews given by Dion DiMucci on Saturday Night Blues on CBC Radio with host Holger Petersen. I was spell bound, listened intently while he talked about all his musical influences and why he's returned to the music that defines his soul, the Blues.

I loved Dion's music. It had an edge and well lets face it he was a sexy guy, teenage idol, who could sing, play guitar, and write a great song.

After listening to this very rare interview, I began to comprehend more clearly just why I was so drawn to his music, learning about the musical heroes that he was exposed to at an early age, and why he's the person he is today.

Dion hasn't changed his music genre but returned to what he always loved. I'd agree with the music critics that say he is the only living musician from the 50s that has continued to be relevant and creative.

What was a great surprise it was finding out that he is also a painter. Unfortunately I've only been able to find these two art pieces online, that I've posted, but I sure would love to see more.

The painting above, he did of Robert Johnson, is powerful and I love it.

On Saturday Night Blues he played several cuts from his album and they blew me away, with his fantastic lyrics, melody and musical expertise. I wasn't surprised, but I was delighted to learn more about his music and to hear his own personal story of recovery and what changed him and why. It was very moving and poignant.

I spent a while trying to find more of Dion DiMucci's art work and the interview I heard last night on Saturday Night Blues, but to no avail. I did find a youtube video done in 2009. Dion talks about loosing his best friends, Buddy Holly, Ritchie Valens, and J. P. "The Big Bopper" Richardson in the plane crash on February 3 1959. It's a very moving testament and a real musical history lesson. It's in depth and lengthy but very much worth watching. It's what changed Dion DiMucci's life forever.

You can learn more about him and his music on his site Dion DiMucci. 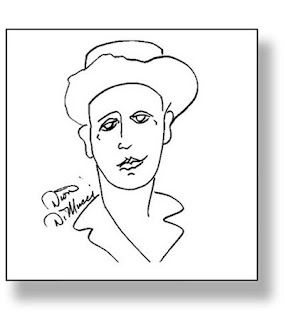 You've mentioned before that you come from a musical family. Do you sing or play an instrument, or do you represent the artist (painter) of your clan?

Yes, Bev I had piano privately and accordion lessons at the Ontario Conservatory growing up and love to sing. My mother was a piano, organ player and singer. Once I reached puberty I just had to learn guitar, and so I bought my first Silvertone guitar at 14 and taught myself. There are lots of musicians and creatives in the family on both sides, mostly painters with art.

I don't play piano any more, but do play my accordion, my father bought me years ago which comes from Italy. I actually love playing the accordion, but sure do appreciate a good piano player.

Stringed instruments are my true love. Long to have and learn the
Celtic Harp one day! I have a good friend I grew up with who also has a musical family. She'd never played an instrument but took up the cello in her 50s! I was never so proud of her doing that. She loves it and though I've not heard her play yet I sure hope to! It's never to late to take up your passions!

You are definitely a multitalented woman!

You are definitely a multitalented woman!

Oh thanks Bev. My Gemini nature has been a blessing and a curse. Mostly now I see it as a blessing. Could never seem to make up my mind, so I did some of this and that. It keeps things interesting!Finally rather like a moth I finally lite and flew into the flame. I followed my passion for painting.

This is a great venue. I was here for a party and there was so much food and it was all done so well! The decor and food both were amazing. Personally, I think the space is laid out really well and the size of the venue NYC keeps pulling great parties.

Lucky you Out Rebound! Would love to attend that!. LOVE NYC!
Thank you for dropping by and for your comment!