Canadians Joined At The Hip 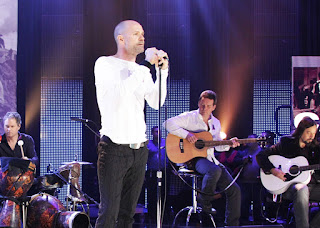 It's common for people to empathize with our personal heroes that are in the media limelight. It can also  speak to how those of us who are not in the limelight, will tend to rally around those folks, but often seem to have a rather ambivalent position toward everyday people affected by life threatening disease or crisis unless we have been directly and personally touched in some way.

I read an article online written in Slate magazine with the highlighted headline that Gord Downie is a 'dying singer.' That's not what I saw or heard on Saturday night. Gord is very much alive and fully engaged in living, putting many of us to shame who whine and complain about our miserable little lives. People "living' this way are not engaged in the process of living, they're engaged in dying, but certainly not someone like Gord Downie and those like him that are living with disease or other difficulties.

We are all dying, but fact is, death is just another part of life and that joins us all at the hip, but death shouldn't define our lives. Living life to the fullest, regardless of our circumstance is what should tell us and others who we are. Gord  Dowie and The Hip, on this past Saturday night, with millions viewing, epitomized this.

Many of us might see Gord as one of our Canadian heroes, but perhaps he is no more, no less that all of us in one way or another, and what joins us at the hip is our heroic humanity.

I thought Dave Bidini described The Hip the best, when he said this in his article.

" Over the past few weeks, interviewers asked me:
"What did you learn from The Tragically Hip?" The answer that I didn't give them, but what I'll give you, is that is wasn't me who needed learning, it was others. People who'd never seen themselves in the mirror, never recognized themselves as being this kind of Canadian.