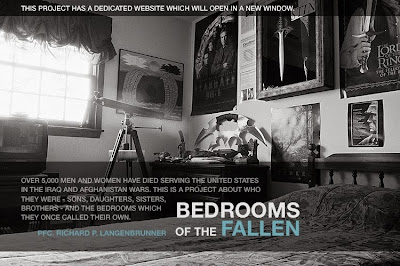 On May 5th 2015, marked  70 Years since the Liberation of The Netherlands from Nazi occupation.  Thinking about this fact, and finding out about photographer Ashley Gilbertson was just coincidental, but I thought it timely, especially considering we as a country and nation are still very much involved with war.

I am not a pacifist, but I also never imagined myself ever saying I think a lot about war, but the fact is, I do. How this happened was a culmination of events, like growing up during the sixties, or being what I call an old fringe hippie I suppose. I wasn't quite old enough to be a full fledged Hippie, but I certainly wanted peace like every young person then.

When I looked deeper into the sociology-psychological and economic factors at the root effects and affects of war, I became acutely aware of why it is important for me as an artist, to educate myself about war. I believe none of us can truly understand the abomination of war, and how normalized it becomes. If we have not experienced it ourselves, the way war correspondents do, and those soldiers who are on the front lines, we can not begin to really comprehend war. Tragically it is true I think, that we will never see the end of war, not even the pacifists believe this to be true.

Finding artists who use their art as tool for peace or hopefully a prevention of so much war, gives me a sense of hope. Living in this world so full of violence, artists can provide an educational alternative to war or at least the promotion of peace through creativity.

Communication today is often defined as being done via the cell phone, and the internet. Creativity for me is the essential form of communication, that more often than not, takes place face to face, regardless of the medium. Communication is about 80 percent listening to what is being said, engaging in a kind of inner dialogue, that desires more to understand, rather than to be understood.

Photography it has been said, is either a window or a mirror. The photographer John Szarkawski once posed the question about what photography is.

" Is it a mirror, reflecting a portrait of the artist who made it, or a window, through which one might better know the world? " Personally I think it can be either one or both simultaneously.

I think photographer Ashley Gilbertson communicates through his photographs and books having a similar message as the war correspondent Chris Hedges , who also expresses in many of his books about War, it's far reaching affect abroad, and at home.

Hedges states, " Violence has become the primary form of communication".  He also sees war as being the same as drug addiction. In my opinion, both of these individuals are preoccupied with war, and both reflect, and very powerfully convey, the definition of the insanity of war, in that insanity is doing the same thing over and over again, expecting a different result.

In Ashley Gilderson's new book Bedrooms of the Fallen  he provides us with an intimate glimpse through the window of his photographs, that enables us to better understand the world and the artist.

" The War on Terror has become the War of Terror "

Email ThisBlogThis!Share to TwitterShare to FacebookShare to Pinterest
Labels: Ashley Gilbertson, Chris Hedges, War Is A Force That Gives Us Meaning

That is really an interesting way to know inner lives of the fallen soldiers. As I looked through the pages (on Amazon), I kept thinking that if someone walked through the rooms of my home, they would get a good sense of me too.
I prefer not to go to war unless there is a need to protect and preserve (WW II is a good example). I can't think of too many other wars I would actively support. That said, I don't look down on or blame the soldiers; they are doing the job they were hired to do to the best of their ability. So sad that some were so young when they died.

Ashley Gilbertson has some deeply insightful thoughts about war as does Chris Hedges. Both are visionaries in many ways I think. We are sending our children to war, which is tragic.

Thanks so much for reading and for your comments.