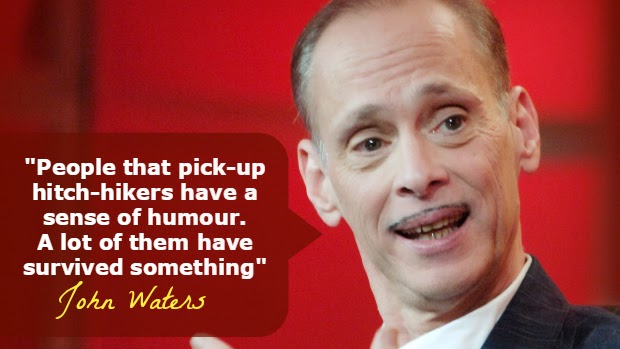 I was a hitch hiker, and sometimes, out of necessity I still am. Of course growing up all through the 60s, this was big adventure, and simply the best way to get around.for a teenager or young adult, and a lot of us did it.

Over the years of thumbing a ride, I've been picked up by Stompin' Tom Conners, farmers, fishermen, professors, a pot smoking senior, who told me she had a twin growing out the side of her rib, and even a truck drivin' Russian who loved the snow, which I found real weird, because I've never been a fan of Canadian Winters.

Hitch hiking does two things; restores your faith in humanity, and can provide reasons for hating the human race.

I've been yelled at, given the finger from car windows by old ladies, left on the side of the road in the wee dark hours of the cold mornings, by a neighbour who did give me rides, up until the light faded from the time change, in the late Fall into Winter. I think he thought because it was so dark, I'd never know it was him driving right by me. He was wrong, I knew exactly who it was, because he was the only one that went by at 5:30 a.m. in the morning. Having the loveliest wife, I hoped she found him possessing some better aspect of humanity about him, than what I did, after that demoralizing, and disdainful experience.

I had a few meltdowns out on the country road, being exhausted, broker than broke, and disillusioned, but all in all, I have to say, my experiences were positive.

I was grateful to have a good sense of humour, and to the folks that picked me up, some of them went out of their way. Many had picked me up on more than one occasion, and generally speaking, folks that gave me a ride, made me feel really good about human beings.

I have a very vivid memory after finally getting my car when I was attending University, and no longer had to hitch hike an hour and fifteen minutes each way, to and from school. I was heading back home after classes and stopped to pick up a hitch hiker, because I could hardly wait to find one to pick up that day. It was a pay back for all the times people had been kind enough to stop, and give me a lift. This elderly fellow looked homeless, down and out on his luck. He was carrying around his belongings in a green garbage bag. My thoughts wondered what his story was , and if he had a place to stay. He said he was going somewhere to try and find work. I suspected he had mental health, and maybe alcohol problems. Before I dropped him off, he asked if I had a smoke, or a few dollars. I told him I didn't smoke and I was broke, which I definitely was. It at least felt good to be able to give him a lift, but I felt sad that he was in such a circumstance. People don't hitch hike usually these days for the adventure any more. They mostly do it because they have to.

I heard John Waters interviewed today for the second time, with Jian Ghomeshi about his new book, Car Sick, that documented his experience of hitch hiking, and what he learned. He had some really insightful, funny things to say.

If I ever see John Waters on the road hitch hiking, I'll be sure to stop, and pick him up, as I am certain he will do the same for me.
Posted by Unknown at 2:48:00 PM