I have never seen war, and I am very grateful for that. I can't begin to imagine what it must be like to experience war. Those individuals that do, are changed forever, in innumerable ways that for the average person are absolutely unimaginable. Our daily " problems " pale greatly, and seem insignificant in comparison to the affects of war on the individuals that have been on the front lines.

We don't have to look far to see that war, civil unrest, and human rights abuses exist throughout the world.

I became motivated to learn more about the affects of war when I was in University. The main reason was because of Christopher Hedges book, War Is A Force That Gives Us Meaning. 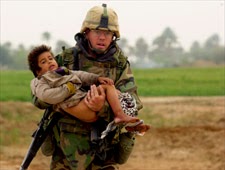 This week I saw two extremely compelling items, that coincided in relation to one another. They both moved me deeply. The first was a photography project about the genocide in Rwanda. Most people are very aware of this event, that lead to 800,000 deaths of Rwandans. Pieter Hugo's riveting and powerful photography about the Rwanda genocide and forgiveness, is entitled Portraits of Reconciliation   that is very poignant.
You can listen to the interview on CBC Radio Q program, Portraits of Forgiveness 20 years after the Rwandan genocide.

The now retired Lieutenant-General, and Canadian Senator, Roméo Dallaire, was appointed Force Commander for the United Nations for Rwanda in 1993, where he was witness to this genocide, which later lead him to become a dedicated, and outspoken advocate, for mental health, genocide prevention, human rights and war-affected children. Roméo Dallaire suffers from PTSD - Post Traumatic Stress Syndrome a direct result of the atrocities he witnessed in Rwanda.

The second item I saw was the singer song writer J. P. Cormier's new and powerful song, Hometown Battlefield go viral, about Veterans and PTSD, what they experience when they go to war, and return home.
J.P.'s song is deeply heart felt, a beautiful expression to honouring our soldiers, and that has now touched thousands of Veterans, soldiers, and their families.