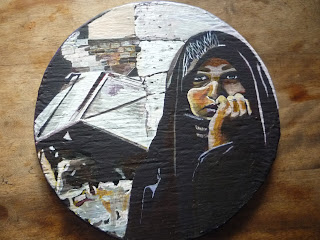 “The violent subjugation of the Palestinians, Iraqis, and Afghans will only ensure that those who oppose us will increasingly speak to us in the language we speak to them—violence.”
― Chris Hedges

As artists and art students we are always being questioned the why of our work, always asked to make ongoing artist statements. This can be somewhat frustrating however I see it as a very beneficial endevour, allowing and enabling the clarification of goals and makes for accountability for what is being created.

After a long discussion with my studio advisor I came away from the meeting feeling encouraged that I have a good foundation to pursue another direction creatively, as I am taking a bit of a u-turn with my work so to speak. Though my advisor felt I should not completely drop what I been recently doing with my series based on Clarissa Pinkola's book, Women Who Run With The Wolves. We both agreed I will return to the series at a later time.

I will continue working in egg tempera, as I am still very committed to continuing to learn about the medium. I have been collecting online photographers of women affected by war to use as subject matter.

Gratefully I have not first hand experience of war. My family Meyers, is a Jewish name. My great grandfather was orphaned when he first came to Minto, from the Europe.

My father had his name legally changed from Meyers to Myers because people were calling him a German Jew.  I learned of an internment camp that was established in Minto during WW11.

This unexpected interest in war began to develop for me perhaps at this time I think, as I found myself always wanting to know what happened to my family and circumstances surrounding the war.


Over this last year of university I took two courses, one on Romantic Poetry, which had an ongoing theme about war and the industrial revolution, the other called History Through Film. What I took away from both of these courses was a despairing feeling about man's inhumanity toward man, thinking about how the war so profoundly affects our world.
In the History Through Film, I was particularly struck how Japan's identity and sense of time was changed, because of the fact that no other country in the world had ever experienced this kind of destruction and devastation from the atomic bomb, all of these events developed my interest in looking further into the meaning of war.


“In the beginning war looks and feels like love. But unlike love it gives nothing in return but an ever-deepening dependence, like all narcotics, on the road to self-destruction. It does not affirm but places upon us greater and greater demands. It destroys the outside world until it is hard to live outside war's grip. It takes a higher and higher dose to achieve any thrill. Finally, one ingests war only to remain numb.”
― Chris Hedges, War Is a Force that Gives Us Meaning

Hi Catherine,
I like your thoughts about artists bearing witness to social injustice. With my rabbi's guidance, I did a work on that theme, using the text from Deuteronomy 22.3 (You must do the same to a donkey, an article of clothing, or anything else that your brother loses and you find. You must not ignore it.) The idea is that one can't be an idle bystander if the social fabric is torn; one is obligated to try and repair the injustice or make amends. Here is a link to my piece: http://www.judithjosephstudio.com/lostice.html

The great spiritual masters have always pointed the way out of strife as being the way of love. The war-like state of consciousness thinks only of it's self and it's own desires, and usually has to undergo considerable suffering to realize the error of it's ways. The great artists have always offered us creativity, beauty, peace, and harmony through their medium of expression - a means of lifting us out of the darkness of the lower emotional states of consciousness so that we can develop wisdom and a broader perspective on how to best serve our fellow beings. Jealousy causes complications in a family (wanting what someone else has) and it also causes complications in a group (war). Love makes things very simple.

Thank you for your thoughts Judith. Your comments are very reaffirming. I LOVE the very powerful piece you did with accompanying quote from Deuteronomy.I will remember this!

Thank you for your very thoughtful comments. I think about the philosopher Rene Gerard and what he says about the scapegoat in society and the relationship to jealousy.