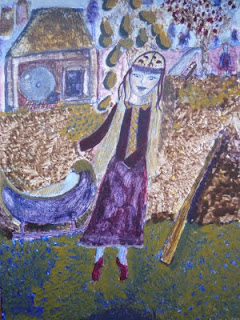 I finished this third egg tempera of my painting series late last night.
"The" Handless Maiden" is about women's initiation into the underground forest through the rite of endurance. The word endurance sounds as though it is means " to continue without cessation", and while this is an occasional part of the tasks underlying the tale, the word endurance also means " to harden, to make sturdy, to make robust, to strengthen, and this is the principal thrust of the tale, and the generative feature of the woman's long psychic life. We do not just go on to go on. Endurance means we make something substantial.
" The Handless Maiden " story is called, in different parts of the world, "Silver Hands," "The "Handless Bride", and " The Orchard." Folklorists number more than a hundred versions of the tale. Other variations are found throughout Eastern and Middle Europe. But the truth be told, the deep womanly experience underlying the tale is found anywhere there is yearning for the Wild Mother." - Woman That Run With The Wolves, Clarissa Pinkola Estes
Posted by Unknown at 10:04:00 AM