End of My Rope and All Tyed Up in Knots 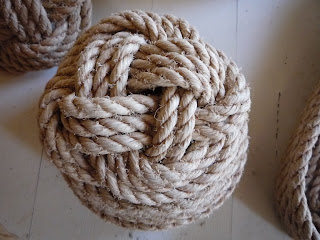 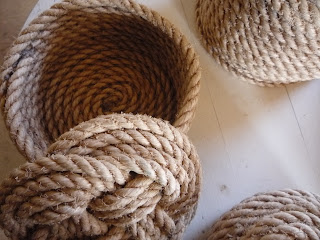 I've not been painting for some time, a few months now, and admittedly I've been in a slumpydydump-dump-dump. I just made that word up. Being sick with a rotten cold hasn't helped after this long drug out Winter.  However I've managed to continue my blogging and journaling long hand. Yesterday and today I have finally felt like actually tackling a few projects, like cleaning up the garden and the yard and making some pots and containers from rope I collected while I was doing sculpture at school over the past three years.

It was great to get outside in the sunshine, listening to all the birds an bugs flying around.

I put the rope in the tub to wash so I can use the next couple of batches I have. Hopefully is will soften it up some too. It can be rough on the hands.

This is what I have made since yesterday. The tops are knots. A Turks Head knot actually, I used for the lids of the containers. Knot tying for me is very addictive. Of course I'm try addicted. Anything I try I'm pretty much addicted.

The most fascinating and wonderful book I have read about the science and trust me it is a science and ancient one at that, is entitled The History and Science of Knots.
Here is the online write up I found that gives the description fo the books contents. It is edited JC Turner and P.van deGriend.

This book brings together twenty essays on diverse topics in the history and science of knots. It is divided into five parts, which deal respectively with knots in prehistory and antiquity, non-European traditions, working knots, the developing science of knots, and decorative and other aspects of knots.

Its authors include archaeologists who write on knots found in digs of ancient sites (one describes the knots used by the recently discovered Ice Man); practical knotters who have studied the history and uses of knots at sea, for fishing and for various life support activities; a historian of lace; a computer scientist writing on computer classification of doilies; and mathematicians who describe the history of knot theories from the eighteenth century to the present day.
In view of the explosion of mathematical theories of knots in the past decade, with consequential new and important scientific applications, this book is timely in setting down a brief, fragmentary history of mankind's oldest and most useful technical and decorative device — the knot.
Contents:
Readership: Mathematicians, archeologists, social historians and general readers.

The Ashley Book of Knots is amazing and beautifully illustrated. 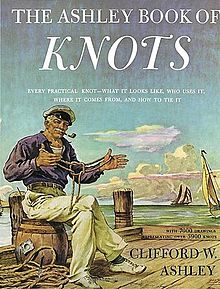 Even apes have been known to tye knots. It's true. I know millions would never believe me but I know you do!
Posted by Unknown at 4:23:00 PM