The meaning and relevance of the phrase “ Personal Is Political” in relation to artists directly involved with feminism during the 70s and 80s is still very pertinent today. It is powerful phrase that either has little value or could have wide reaching implications depending on what context it is used, and who is saying it.
There are a number of people that may or may not be the source of this phrase however as Gloria Steinem aptly suggests, knowing who first said it,would be like knowing who was responsible for first coining the phrase “World War 11.”
What is more significant I believe, is the debate surrounding the phrase as,  feminist Carol Hanisch states in her paper.

“ Political struggle or debate is the key to good political theory.”

Carol Hanisch premises her paper , “The Personal Is Political “ by clarifying she did not give this title to the paper which began as a reply to a memo entitled “Some Thoughts in Response to Dottie’s Thoughts on a Women Liberation Movement”

In many respects I think the feminist art movement during the 70s and 80s begins and ends with Judy Chicago, though I know there were many other women along side Judy Chicago, that if they had not been proactively present, she would never been enabled to accomplish what she did.
At it’s core, feminism is collective and collaborative, personal, political, public and private.

Aya Dorit Cypis is very committed to the feminist idea of the personal as political in her art practice.  In her art statement she succinctly expresses the idea of how understanding the personal is a prerequisite to the political, the personal needs to be understood before the political can be realized or even recognized in one’s life and artwork.

“ I first studied sociology in the late 1960's but moved into the arts when I recognized that there was a crucial variable missing from my social studies, that is, subjectivity. How could I study others when I could not recognize myself?”

Aya Dorit Cypist sees art as a reflection of the public and private, simultaneously reflecting the artist’s private life. She says art is both objective and subjective.
Sightlines, an installation of photographs by Aya Dorit Cypis, consists of oil clay sculptures of woman’s heads. The portraits are of the first female Palestinian suicide bomber, and of another Israeli woman who was killed in the explosion. The photograph of the two women was featured on the cover of Newsweek. Forensic investigator, Dr. Irma Rodriguez sculpted the portraits of the women who were murdered. The photographic exhibition engages the viewer in
personal and the political. Her work solicits a response to what we see, to question our own identity, culture and responsibility. We are psychologically drawn in and are somewhat enmeshed in the complicated relationships of contemporary cultural politics and we are forced to question our role in it.

“ While an artwork may be interpreted to reflect on public life issues of culture and history, this same work simultaneously reflects on and is generated by the private life of the artist herself. Art is of and from the artist, yet is not the artist. Art, like a mirror, is utopic and heterotopic, present as form yet reflecting something outside of itself. Art is simultaneously objective and subjective, dependent on its power to represent or signify something larger than itself while tied to a social context of time and place and to being read by a receiver/reader outside of itself. Roles of public and private, always implicitly present in an artwork, are inter-reflexive
inseparable and infinitely uncertain.”

The personal and the political are like ying and yang. It is difficult to not have one without the other, if not impossible. Everything we do is political however when Judy Chicago is asked in an interview if she thought the feminist idea of the  “personal is political” has a function in art, she insists that we can not think of art as just being personal as political, but should be setting our goals and aspirations beyond as the political is universal because the political realm is always changing and can make the art of the day redundant.

“It actually has limited usefulness in terms of understanding art. In order to make art that communicates or is meaningful, you actually have to transform the personal into the universal. If you only translate it into the political it becomes time-bound, and when that political period is over so is your art. One of the things that I’ve always attempted to do in my work is to deal with subjects that have universal meaning, even if they come out of personal experience.”
Art is about “transcending the personal” she remarks.


Artist, feminist and social activist, Martha Rosler has lived and experienced both the personal and the political and I believe has a firm understanding what this phrase means not through books. but through hands on, actualized experience and struggle through the 60s 70s and into the 80s and what is commonly known as the second wave of feminism.

Feminism in the 1970s was marked and punctuated by Judy Chicago’s full page ad announcing in Art Forum her official and personal name change to Judy Gerowitz, when the ad stated, she’s made the name change to divest “herself of all names imposed upon her through male dominance...” This was one of the earliest actions taken by Judy Chicago to make the personal political.

Implementing America’s first feminist art education program in California State University gave her the impetus for the feminist art movement. This quickly evolved into the one of a kind department in any art school now at CalArts, with Judy Chicago and Miriam Schapiro  who was born in Canada by the way, where the instructors.
The historical Womanhouse, made the personal, political and it was the first public exhibition of “feminist art”

“The age-old female activity of home making was taken to fantasy proportions. Womanhouse became the repository of the day dreams women have as they wash, bake, cook, sew, clean and iron their lives away.”


The objective was three fold over a two month period. The 25 female students were give the tasks of firstly, to come to grips with their own personal problems while working to complete the physical repairs to the house which was an old deserted mansion. They were to learn new skills,
work collaboratively. Lastly they were forced to challenge themselves as artists and against the “role limitations” as women.”

Judy Chicago’s, iconic “The Dinner Party” was produced over a period from 1974 to 1979 the year it was exhibited. The collaborative art work is finely detailed place settings for 39 mythical and historically famous women. These 39 women being personally invited guests to a very public dinner that becomes powerfully politically charged with government officials using words like
“blasphemes”  and even “pornographic” in attempt to have The Dinner Party censored and removed and from being exhibited. Fortunately this attempt and was never successful and it is now permanently house in the Brooklyn New York Museum.

Suzanne Lacy who worked with The Whisper Minnesota Project in 1985-1987 is an another example of bringing the personal to the political again around a living table setting, creating the Crystal Quilt, where 430 women, 60 years of age gathered around tables placed on a 82 foot rug engaging in personal conversation about their lives around with tables that looked like a quilt, designed by Judy’s friend and colleague, Miriam Schapiro.

Recently Judy Chicago wrote a book that has been recently entitled, Frida Kahlo:Face To Face, coauthored by art historian Frances Borzello.
She makes the points in an interview that Frida Kahlo’s  work has never been looked at in relationship to other women and she hopes her book will enable a better understanding of Kahlo’s work.
Chicago states in an interview about the book she discovered she has some things in common with Frida Kahlo.

“ Our identification with our fathers, our use of color and our love of and representation of animals–I think those are the three major areas that we have in common.”
She also points out that Frida Kahlo’s work has never been looked at in relationship to other women and she hopes her book will enable a better understanding of Kahlo’s work.
Judy Chicago identifies with Kahlo’s primarily because of the what is the heart of feminism and how Chicago relates to the world as a woman, an artist and a feminist. She understands and epitomizes the meaning of the personal is political, inclusively and collaboratively, transcending place, time, gender, age, race, culture and religion.

“I think that one of the things that is sort of startling about a lot of Kahlo’s images is that she is able to transform what was intensely personal into universal statements. Hence her image, for example, of The Broken Column, which  is very much about her accident and her unrelenting pain and the rods that were inserted into her spine. But that pales because it becomes an image of universal suffering and transcending illness. The idea of coming to consciousness thorough realizing the personal is political is one thing, but that is not what art is about; art is about transcending the personal.”

Judy Chicago understands and I believe epitomizes the meaning of the personal is
political, inclusively and collaboratively, transcending the personal, time, gender, age, race, culture and religion. 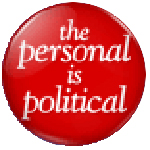 I love your statement about art transcending the personal. The transforming quality of art in its many forms is a real gift.

Yes, the trans-formative power of art gives one great hope, and what a gift that is!

Thank you Betsy for stopping by and leaving your comment.