Recent life events have caused me to think more lately about the past, my relationships, wellness and illness, life, death, and all those things that tear us apart, tie us to one another, and bring us together.

In 1979 I met Bill. We were both frequenting the Younge Street Mission Evergreen, in Toronto Ontario. I was living around the corner of Gerrard Street and Younge, at the Women's Christian Temperance Union, because the rent was relatively affordable, and I needed a place to live, while I was attending school. You could only entertain gentlemen in the parlor, never upstairs in your room! Bill was living around High Park, on Roncesvalles Avenue, in a windowless, dark, one bedroom, basement apartment.

While I was at the Mission one evening, before I'd met Bill, I heard a young man laugh out loud, such a great full laugh, which caused me to take immediate notice of him, and I said to myself, "Who the hell is this guy.?" He'd made such a strong impression on me. He was wearing a toque on his head, like the one Jack Nicholson wore in One Who Flew Over The Cuckoo's Nest. Jack was Bill's his favourite actor, and that was his favourite movie. I was later to find out exactly why. 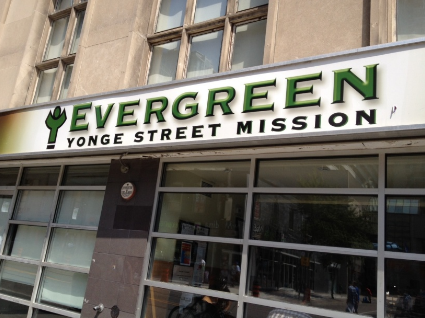 We began dating, and after a very short period of time Bill became my husband, and then quickly became, my late husband, as he suffered with Paranoid Schizophrenia and Brittle Diabetes from the age of 16, and was an out-patient at the Clark Institute in Toronto for ten years. Our first date was spent in the outpatients at Saint Michael's Hospital.

Bill was an extremely caring, compassionate, creative person, a writer, with a great love of music, and wicked sense of humour. He was very intelligent, and could relate to any one, especially to street people. Everyone loved Bill.

I have known many creative artists who have mental disorders of some sort. I really don't know if there is a connection between the two, or simply that mental illness is more common than society cares to acknowledge, because it's frightening, if we don't understand. When it comes to any disease, many people go into denial.

“We do not have to visit a madhouse to find disordered minds; our planet is the mental institution for the universe.” - Göethe

I don't know if the correlation between mental health and artists is so important, but what I do know, is that it is essential that people need to talk about it, so we can get educated, and change the stigma and misunderstanding attached to mental illness. The silence and stigma surrounding the topic is what is not only crazy, but so very destructive and threatening to peoples lives, more so than the illness itself.

I found a site today about bipolar artists that is very informative, compelling and worthwhile checking out.

Hi Cathy, I read your blog and found your story very interesting and loved your photos!!!!

Awww thank you so much Peggy!

Dearest Catherine - I first became mentally ill in 1986. When I recovered I wrote a one woman show "Cracked Up" I toured it to many countries and I still do a version of it in my speeches to businesses. When I began I was like a lonely voice in the forest. No one was telling their stories. Now I am pleased to say that many people, including celebrities are open about their mental illnesses. We have come a long way. Talking and writing and performing and painting and shedding light. thank you for your blog. I remember well how happy Bill made you. Lots of love Kate

Dear Kate!!! Thank you so very much for commenting. You might find this hard to believe, but I saw your play one late night I was working late at a group home, every one was in bed and I was working alone. It was in the middle of the night and I was watching TV, VISION TV to be exact. I was so wanting to find out where you were all those years and then there you were on TV!!! I couldn't believe it. That's when I'd hoped and some how knew we'd reconnect, some how, some way, some day! I now we did all these miles apart, but just a blog away!

Bill, he sure thought the world of you, as do I. Love you Kate and I am over the moon for your life and for your happiness.

You are right, it is such a wonderful thing seeing more people being open about mental illness especially in the media. We still have a long way to go. But little by slowly things are changing!