The Big Gulp - In Praise of Television 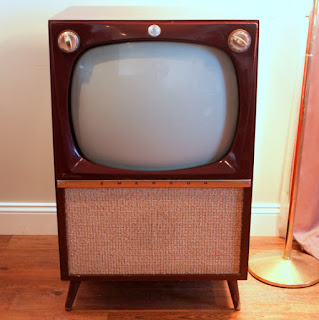 The 20 years I've lived in my home, I have had two televisions. One very small black and white, with  broken knobs, and a broken antenna, that would work great with a coat hanger, and I turned the knob to the  with a set of pliers. I got two channels. Good times.

I think perhaps part of the reason I hung on to it for so long, was because it had been a wedding present given to my late husband and I in 1980 from my father and mother-in-law. When it finally bit the dust, I bought another small  this time coloured T.V., only because I had two foster children and decided to get a satellite dish for my daughters.

Living in very rural Nova Scotia especially during the long Winters here, I thought having subscribing to a satellite might be a way to alleviate those long dark days in order to hopefully avert teenage angst and boredom.
After my foster daughters were gone, I immediately unhooked my dish, got a computer and finally the internet, when it became available. I haven't watched T.V. since, and don't miss it. I am no longer a  fan.  I never really was so much and I'm glad I grew up with radio and CBC is on everyday. It's good for my brain.

I still have my old Dell computer, no cell phone or iPad and it is my T.V. now, though I only watch one show, a few you tube videos, and use my computer primarily for writing my blogs, pursuing my creativity, and of course for staying in touch with folks I don't get to see much face to face, due to distance.

Falling short of becoming a Luddite, long before the internet, I used to think computers were not exactly evil,  though I suspected they posed some unknown threat to the world as we know it. I had an attitude much like the one that existed when televisions first appeared around the year I was born in 1953. Needless to say, I don't feel this way any more, however I do see the positives and the negatives of our online lives that we are consumed by with the internet and all our gadgets, that are supposed to improve our lives. Sometimes I seriously wonder if it's made us smarter or stifled our brains, and are especially affecting our ability to learn, particularly our children.

As a kid there was nothing more delightful then Saturday mornings on the floor, in front of our big black and white TV watching Popeye, Paul Winchell, Captain Kangaroo, and Soupy Sales, Merry Melodies, Bugs Bunny and Felix The Cat. As I got older and I could stay up later,  the Ed Sullivan Show, Bonanza and Gunsmoke replaced the cartoons more or less and watching these shows with my family was a special kind of time that is ever engrained in my nostalgic memory of TV.

Mark Schatzker is a Toronto Journalist/Writer and a CBC Parenting Columnist who gave a real interesting commentary about television versus iPhones and iPads and family interaction and the family dynamic. He made some pertinent points.

I'll never forget the great Journalist and CBC host of Man Alive Roy Bonisteel who had gave a very poignant presentation at the Nova Scotia College of Art and Design way back in the 70s, when I was a art education student. The main message he imparted about television was that we needed to watch, and engage in a mindful way. He encouraged us to prompt children to talk back to T.V., to question what we were seeing. I think we now need to do the same with all of our media and more importantly talk to each another not always behind a computer screen, but face to face.