"It Might Be A Shit Sandwich, But You're Going Have to Eat It!" 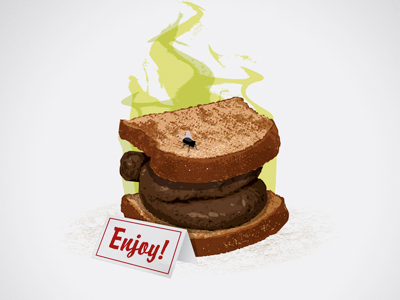 Choosing to be an artist can make for some 'challenging experiences' to say the least. The unexpected situations an artist can suddenly find themselves in, in retrospect, we can find them funny, and even kind of pathetic, and some we'd just rather forget about, because they were so unpalatable, leaving us with a feeling, high up on the ick factor, jaded or resentful.

As artists we often get to see the best and the worst of humanity, including ourselves. On the other hand, there are many rewards, surprises, and sometimes even great remunerations for our work, which can restore our faith in humanity, even if temporarily.

One of my long time artist friends and I were commiserating today, how as artists, we can get ourselves into some crazy circumstances, and come up against people who act like what we do as artists is valueless, unless it is offered for free of course, and then we aren't half bad.

I relayed to my good friend, a story I have told to a few friends, that is one of those pathetically funny scenarios mentioned, that I've experienced, but there was a lesson learned as well. Ever time I share this, I think to myself, perhaps this 'story' would make for a good blog post. My rational for not blogging about my experience, was to spare or perhaps avoid embarrassing those involved including myself. I thought it might be just better to forget about the whole thing, because I felt foolish for allowing myself to be devalued and taken advantage of once again. But they shall remain nameless, and I think this is a story worth telling.
I am not blaming any one but myself. But this isn't the funny part! I'd rather get to the funny part!


My good friend  thought, and suggested that my story would make a good blog post. I had to agree, and so I thought ya I'm going to do that.

I think it was last year, I was asked create a painting that looked like a stack of books. The stack was already made from wood in the form of books, and I was going to paint each block to look like a book, with the titles on the side and on top, the cover of the book would act as the main focus of the painting.

It took me probably 10 to 15 hours to create a detailed egg tempera painting with imagery, and a kind of calligraphic painted letters for the titles. I finally completed the painting, and was very happy with what I had created. I dropped it off where we'd agreed to, and went home feeling relieved and quite pleased with what I felt was a job well done.

Understand there had been little talk of monetary remuneration, and I felt it was for a good cause,, though I hadn't thought it through. My bad. More than anything in retrospect, I am certain, I was being my usual people pleasing self. The truth being, my ego had been flattered just because I'd been asked to make art!

The deal was as such. There would be a display of the work and then an auction. The artists were supposed to get a percentage of the money raised through the event. The remainder would go back into a fund to promote another 'creative project' for the town. Alrighty then! I didn't give it another thought. Once again, my bad!

It had taken me much longer than I expected  to finish the painting, so I didn't varnish it, as it would have taken even longer to dry, and I was running out of time. When I had informed the individual who'd made the request for this painting project, they'd offered to varnish it. Perfect I thought, and I said thank you for offering to do this for me.

I hadn't heard anything for a day, until finding an email in my inbox. It read, and I paraphrase. I don't know how to tell you this Catherine, but when I brought your painting into the house to varnish, I'd set in on the floor, and then went outside for about twenty minutes. Returning to the room where I'd left your painting, I looked down, and saw that the top of the painting (which was the top cover as mentioned, of said painted book) was gone, completely gone.

Gone I said? What do you mean gone? It had disappeared the individual said, adding, when I looked down again, saw my dog licking his jowls, and realized the dog must have licked off the egg tempera painting.

Dogs, they like eggs, and they will lick your egg tempera painting off, completely off.
I was a little shocked initially, but I had to laugh, and I said not to worry about it. I knew the person felt really bad. Trying to comfort her I said, " My Coonhound would eat the arse end out of a donkey! Not sure if that made her feel better. She offered to re-do the painting. I declined and said I would do it again which I again completed after another 6 hours of painting.

The auction did not go according to plan, was unsuccessful. Someone out there got a damn nice painting for peanuts and I got a grand total of $11 for about 22 hours of work.

For someone already on a fixed income, well below the poverty line, and eats dust sandwiches, that is demoralizing enough. But allowing myself to get involved with projects like this, or to not be properly remunerated for the work I do, only adds insult to injury, and just greatly increases my already existing fear of financial insecurity.

Most artists and many others, live well below the poverty line. The average artist lives off an annual income of $18,000. It has been this amount for as long as I can remember.  I will say this. If I could bring in $18,000, solely from my art work, I'd be be laughing!

I may joke about eating dust sandwiches, but there isn't anything funny about poverty, and not having enough to eat. But I refuse to allow myself to eat any more shit sandwiches, and then say thank you, just before I purge.

I think I would have been stunned speechless when she said the dog licked off your painting! Though it is funny now, it must have felt like a kick in the stomach then. Many people do feel artists should almost give away their work. But if they were paying someone who built them a cabinet, they would have no problem reimbursing them for their time, talent and materials. In my book, everyone deserves to get paid for the work they've done, whether artists and poets or doctors and engineers.

I was a little gob smacked, lol, and then my thoughts went to her dog, because I was worried it was going to get real sick, since eating tempera powder isn't real healthy. But thank goodness none were toxic. Next I immediate thought was of my crazy Coonhound Blue Seamus who would eat anything not nailed down!

Amen to your comments Bev re everyone is deserving of getting paid for work done! Anyway, lesson learned, don't eat that Catherine, that's shit! Lol