Eyes On The Prize 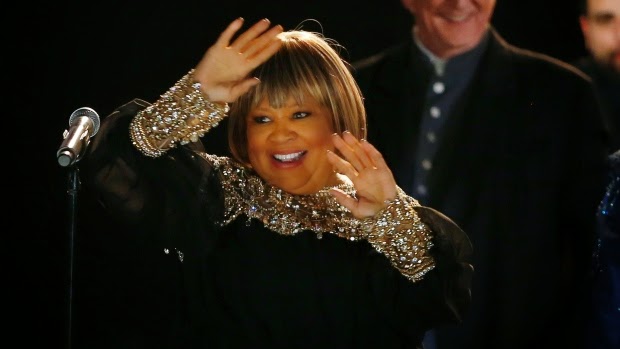 Knowing Mavis Staples was going to be interviewed on CBC Radio ,Q this morning, I was really looking forward to it. She sure didn't disappoint, and it was a wonderful interview. She takes you back to a time in history that is very relevant in so many ways to what is happening in the world now. I could listen to her talk all day.

Mavis is not only an inspiration and example of hope, but the message she conveys through her music is a real wake-up call, and reminder to keep up the good fight against racism and all the other troubles in the world.. I could  hear in her voice, and by what she said in relation to recent events in Ferguson, how she sees things getting worse in our world.

In spite of this, she is still filled with hope and holds on to her deep faith.


This is a great bio I found on the CBC site.

On their second collaboration, legendary singer Mavis Staples and Wilco leader Jeff Tweedy have
crafted a gospel album for the 21st century, a music that strives for faith in a world where nothing can be taken for granted.

On One True Vine, Mavis Staples gives voice to something new in her repertoire, something deeper and
more resonant with our times; longtime fans will notice a new reserve in her singing, a muted, plaintive quality that serves the darker, more nuanced songs collected here perfectly.

If her Stax hits spoke for a growing black social consciousness, and her seventies collaborations with the Band and others gave spiritual weight to the rediscovery of traditional American music, then in our post millennial drift, Jeff Tweedy has crafted a pulpit from which Mavis lends her voice to a search for grace.

One True Vine is a dark night of the soul, a journey from a search for faith to glorious belief.  Starting with Alan Sparhawk from Low’s down tempo “One Holy Ghost” – a song that feels the presence of God without
fully comprehending it – and moving through the Jeff Tweedy original “Jesus Wept,” a questioning of the darkness in the world, the album begins in the depths.  Even the perfectly chosen Funkadelic classic “Can You Get to That?,” a high-flying respite in an otherwise subdued first half, is built around a question of the spirit. Then at mid-point, Nick Lowe’s “Far Celestial Shores” picks up the pace, and the album opens up like a parting of the clouds. The tempo kicks in with a tent-revival throb, and even when things slow for a moment with the greasy funk reworking of the Staple’s “I Like the Things About Me,” it’s a second half of
light and redemption.  Closing with the beautiful ballad “One True Vine” (the third of the Tweedy originals), the album ends on a note of salvation, with Mavis cradling the lyric like a prodigal son.

No one should be surprised at this new Mavis Staples; for six decades she has been the solid rock of American music.  Alongside the family group she is so identified with, the Staple Singers, Mavis has managed to transform herself as she goes, yet never alter. From the delta-inflected gospel sound she helped create in the 1950s, to the engaged protest of the civil rights era, and then, amazingly, on pop radio in the Stax era with a series of soul anthems, from “I’ll Take You There” to “Respect Yourself:” through all these Mavis carried on, her warm embrace of a voice the only constant.  How many musicians can claim this: to exist outside any scene, outside genre, yet weaving themselves into the fabric of soul, R&B, jazz, gospel, rock and blues?

Many of the maverick names that come to mind are composers as well; that Mavis has created her legacy as an interpreter of others – an underestimated talent since the days of the band singers – makes her achievement all the more impressive.  She gives voice to others; more than that, she gives voice to entire movements, to eras, to songs so old their roots are lost.  And she manages to work a little PFunk in there too.

Recently, recognition of Mavis’ unique role in American music has been growing beyond her longtime
fans, dipping into the wider world of pop as she performs alongside Justin Timberlake at the White House tribute to Memphis Soul, or with Elton John in a show-stealing Grammy tribute to Levon Helm of the Band.  Her first album with Tweedy at the controls, You Are Not Alone, won a much deserved Grammy.

Now, on her second collaboration with Tweedy – Mavis calls him “Tweedy” all day long, and they are a pleasure to watch in the studio, riffing like some old vaudeville team – she has made an album to match her new national profile.

One True Vine is an album that will both surprise longtime fans and solidify her position at the helm of
American music.

Listen to the CBC Q interview with Mavis Staples here.


One of my very favourite songs she has done is "Eyes On The Prize". It is a collaboration with the very talented musician Ry Cooder, whom I love so much.

Mavis she's surely keeping her 'eyes on the prize', and we would do well to do the same.