Six 16 Kodak Camera - The Photo As A Window Or Mirror 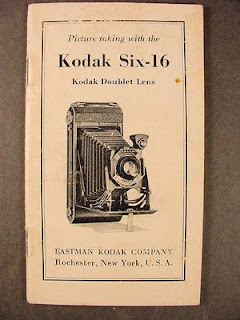 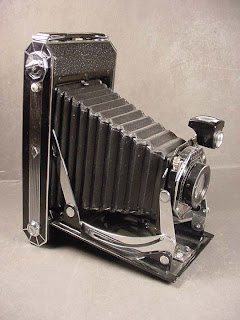 This is a special camera, that belonged to my father. It is a 116 Kodak. He took all of our family photographs with it and developed them. It took pictures that were really quite beautiful.
The sepia colour of old photographs have an of atmospheric quality that supports the subject matter and image taken.
It's a vintage, an antique. I love this camera, but haven't had the opportunity to take pictures with it yet because I need to modify it for 120 film, as it is missing a spool that takes up the film.
Presently, I am involved with the colour film process, combined at times with black and white, in combination with coloured film and in digital format, using a scanner, photo shop, and a huge printer.
During the three years of photography, I have focused on black and white film with manual and the large format view camera. Frankly I am in love with the black and white image. That translates even into television and film for me as well. Primarily the reason being, that the focus is on the image and subject matter. The eye is not detracted by the vibrancy of colour.
Learning about photographers like Ansel Adams, Robert Frank, Ralph Gibson, Sally Mann just to name a few is such a wonderful experience. Not just because of their ability and talent as artists but because of the people they are, driven, passionate, compassionate toward life and the world. They actually are often more like philosophers in my opinion. I love to hear the things they say about photography and what and how they perceive and what they reflect back to the viewer.
Black and white are the colors of photography. To me they symbolize the alternatives of hope and despair to which mankind is forever subjected.
Robert Frank

I have been frequently accused of deliberately twisting subject matter to my point of view. Above all, I know that life for a photographer cannot be a matter of indifference. Opinion often consists of a kind of criticism. But criticism can come out of love.
Robert Frank

There is one thing the photograph must contain, the humanity of the moment. This kind of photography is realism. But realism is not enough - there has to be vision, and the two together can make a good photograph.
Robert Frank

..photographs open doors into the past but they also allow a look into the future. - Sally Mann

Photographic technique is no secret and – provided the interest is there – easily assimilated. But inspiration comes from the soul and when the Muse isn’t around even the best exposure meter is very little help. In their biographies, artists like Michelangelo, da Vinci and Bach said that their most valuable technique was their ability to inspire themselves. This is true of all artists; the moment there is something to say, there becomes a way to say it. - Ralph Gibson
Posted by Unknown at 8:15:00 PM

I guess for you, black & white photography is the expression of less being more. I love Gibson's reference to the quotes of DaVinci & Bach about inspiring oneself, as well as his observation that once one has something to say, there becomes a way to say it.

I think your observation, about less being more for me is accurate Betsy. I'm not a purest it's just that I understand how the image or subject can be undermined by the seduction of colour. With digital these days everyone is a photographer, but I don't believe that to be so. There is a lot to be said for the slow physical process of things, which lends itself to a meditative state that enables creativity, thought and visual perception.

It's true we have to inspire ourselves. I don't wait for inspiration, but if I engage in the creative process, it's sure to come, that's been my experience.

I love Robert Frank's reference to the humanity of the moment.

I am very interested in the comparison and contrast between painting and photography Betsy. I think it was Ralph Gibson that said people believe the photograph but are not so certain about the painting. I find this very curious, and want to investigate it further.