"Being a Cynical Asshole"

Have we all become a bunch of cynical assholes?

I was sent this article I've highlighted  exploring the topic of cynicism that you might find interesting.

The world needs cynics to cut through the crap of elitism, and it's necessary fodder for comedians. There will always be those who become cynical to the point of being jaded, and that's not helpful, healthy nor is it funny. I believe we have to find an inner resource to rise above of the horse shit, and not get stuck in it. Integrity within the world is hard to find by times.

I don't see cynicism as a negative thing in and of itself, but normal and healthy. I'm of the opinion that what's really at the heart of the situation being discussed in this article, in relation to the present generation, is a pervasive sense of hopelessness. I don't believe it is only present within the younger generation, and may very well be increasingly prevalent throughout the world.


As a 60 something artist who attended two Universities to study art, during very different periods of time, first as a young somewhat naive 22 year old art student in the early 70s, and then as mature art student in 2008, I got to see two unique perspectives.

I have to say, I didn't find the level of cynicism so much different then, from now. Though perhaps because there is more of a wake up call for so many younger students today, who can be naive, and are a rather privileged group. Once they're out of University, reality comes crashing in, upon realizing they've no employable skills, are saddled with an overwhelming debt, and after having some very high unrealistic expectations.


Returning to University as a mature student, I met some younger students who were astute, intelligent, insightful, and wise beyond there years. The smart ones could see through the way things are, as opposed to illusion and hype.  Those students that weren't so discerning, often came from very privileged backgrounds that fostered a sense of selfish entitlement.

The world in general, and it's no different within the art world, there exists a division between two socioeconomic camps. This can result understandably, in resentment toward those who hold the power and control or a disdain for those who don't.

A sense of hopelessness is proportional to the ever increasing gap between rich and poor. It's a affront on generousity, abundant joy, and gratitude on both sides.

Each individual has to find a way to rise above the hopelessness. I believe and know there's always hope for the hopeless regardless of what camp you are in. 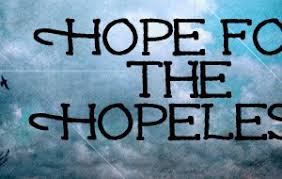 Email ThisBlogThis!Share to TwitterShare to FacebookShare to Pinterest
Labels: Abundant Joy, Being a Cynical Asshole, Cynicism, Generousity, Gratitude, Hope for the Hopeless