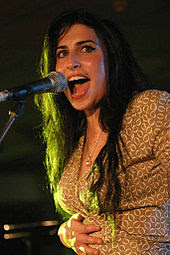 When I heard Amy Winehouse tragically died four years ago, it really bothered and saddened me very much. The fact that she was a fellow addict, I could almost see where this all was going to end, particularly when she recorded Rehab.

She was such a special soul. A beautiful young woman with an incredible gift and passion for music, which made the loss even more acute. Her singing and song writing ability was powerful and seemed to be coming from a mysterious unknown place. It has been said that she was the most gifted lyricist of this generation, and I have no doubt about that.

The documentary film Amy recently released,  producer Asif Kapadra's says, his desire to make people think, is an objective that has certainly been achieved.

In an interview I listened to today about Amy Winehouse, musicologist Robert Harris  stated that no one really knew much about her until her last performance and then knew more, following her death.

It's been said that ten other people are directly affected by someone else's addiction, and Father Martin said for every alcoholic that dies, another alcoholic's life is saved.

I am certain Amy Winehouse's death is not in vain when people like Asif Kapadra is making a difference by telling her story. As well, shortly after Amy died, her family started the Amy Winehouse Foundation  whose primary goal is to help young people by preventing the effects of drug and alcohol misuse and abuse, to educate, inform and inspire vulnerable, disadvantaged youth, and to enable them to reach their full capabilities and potential, particularly through music.

She was a talented soul, and I was sad to see her addiction escalate to the point of death. I'm glad that there are those out there who will use Amy's life to try and make a difference in other lives.

I read a negative review of this documentary in that the person commenting was saying that this also was exploitative. I don't agree I think it simply shed light on an important all to common story. Those who he interviewed would not have had been interviewed otherwise.

People don't want to talk about the ugliness of addiction or mental illness and our own responsibility. We are all culpable in some way.