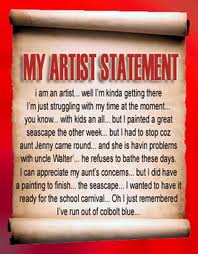 This week's Art Seminar assignment is a good one. Here it is.

Compose a series of three artist statements. One should be written in a straightforward declarative manner, using strong confident language and clearly stating what it is that you do; you are the authority on your own work.
The next should be written from the third person perspective, as if it is written by an outsider looking in, responding to your artistic process; as if a total stranger is describing the work of another total stranger, (this might also be someone who also has no inherent knowledge of contemporary art).
The final statement should be constructed entirely from one or a combination of borrowed text(s); prose, poetry, lyrics, and/or any form of word or language authored by another, but somehow fittingly conveys the elements, if not the essence, of your artistic process; appropriate appropriation.

As an artist I have come to accept and realize my first love in my drawing and painting practice is subject matter found within the world of the representational, figurative, and portrait. I've long had a great appreciation for this expression and interpretation of my subject matter. That said, it is no longer, such a rigid definition, as it had been for me in the past years. Over the past three years I have had let go of realistic rendering, in order to return with a renewed perception and ideology of what it means to involve myself with art, and in particular with painting. I give myself permission now to make " mistakes ", which results in me being enabled to greatly enjoy the creative process, while sustaining my interest and passion for realistic rendering, or not, without any preoccupation with the completed outcome.

I have found the medium of egg tempera to be extremely satisfying, in that I have discovered numerous exciting qualities I greatly appreciate about it, especially in how it resembles drawing, in the manner it is maneuvered through continuing line and mark making, around and on the surface of the panel. Drawing for me is what I consider to be essential and at the foundation of the kind of paintings I want to create.

The intensity and luminescence that occurs through the building up of layered applications of a variety of colour is visually powerful, in visceral way for me, giving a sense of light and a shimmering, sensual quality.

In egg tempera, I feel I have found the medium I am passionate about and this I have learned is absolutely essential to me, as well as it is necessary for me to be in love with my subject matter, in order to continue painting.

After working for many years in oil medium alone, egg tempera has given me a deeper vision and passion for painting. The practicality of the pigment being economic, more environmentally friendly, through the use of egg yolk, the fact that it goes along way, and it's extended life and sense of permanent quality of egg tempera paintings, are all reasons for my decision to use the medium. I had started out using masonite as a painting surface, but will choose wood surfaces in the future, as it is much more substantive.
Currently I am involved with making a series of egg tempera paintings that depict images drawn from story telling and fairy tales, based on the book, Women That Run With The Wolves, Myths and Stories of the Wild Woman Archetype, by Clarissa Pinkola Estes, Ph.D, a Jungian Psychoanalyst.

Artist Statement in the Third Person

These paintings have a subject matter that is symbolic fantasy, myths, perhaps dream like or even nightmarish in nature.

The paint used is not familiar and has an unusual luminescent quality and translucent appearance and many marks made on the surface look like the artist is drawing with the paint. The colour combination is basic and simple. The consistent use of the same colours helps to unify the series of work.

Final Statement
"We are all filled with a longing for the wild. There are few culturally sanctioned antidotes for this yearning. We were taught to feel shame for such a desire. We grew our hair long and used it to hide our feelings. But the shadow of the Wild Woman still lurks behind us during our days and in our nights. No matter where we are, the shadow that trots behind us is definitely four-footed."

The Wolf's Eyelash by Clarissa Pinkola Estes
If you don’t go out in the woods, nothing will ever happen and your life will never begin.
"Don't go out in the woods, don't go out, "they said.
“Why not?  Why should I not go out in the woods tonight?” she asked.
“A big wolf lives there who eats humans such as you.  Don’t go out in the woods, don’t go out.  We mean it.”
Naturally, she went out.  She went out in the woods anyway, and of course she met the wolf, just as they had warned her.
“See, we told you,” they crowed.
“This is my life, not a fairy tale, you dolts,” she said.  ”I have to go to the woods, and I have to meet the wolf, or else my life will never begin.”
But, the wolf she encountered was in a trap, in a trap this wolf’s leg was in.
“Help me, oh help me! Aieeeee, aieeee, aieeee!” cried the wolf.  ”Help me, oh help me!” he cried, “and I shall reward you justly.” For this is the way of wolves in tales of this kind.
“How do I know you won’t harm me?” she asked – it was her job to ask questions.  ”How do I know you will not kill me and leave me lying in my bones?”
“Wrong question,” said this wolf.  ”You’ll just have to take my word for it.”  And the wolf began to cry and wail once again and more.  ”Oh, aieee!  Aieeee!  Aieeee!  There’s only one question worth asking fair maiden, wooooooooor aieeeee th’ sooooooool?”
“Oh you wolf, I will take a chance.  Alright, here!”  And she sprang the trap and the wolf drew out its paw and this she bound with herbs and grasses.
“Ah, thank you kind maiden, thank you,” sighed the wolf.  And because she had read too many of the wrong kind of tales, she cried, “Go ahead and kill me now, and let us get this over with.”
But no, this did not come to pass.  Instead this wolf put his paw upon her arm.  ”I’m a wolf from another time and place,”  said he.  And plucking a lash from his eye, gave it to her and said, “Use this, and be wise.  From now on you will know who is good and not so good; just look through my eyes and you will see clearly.  For letting me live, I bid you live in a manner as never before.  Remember, there’s only one question worth asking fair maiden, wooooooooor aieeeee th’ soooooooool?”
And so she went back to her village, happy to still have her life.  And this time as they said, “Just stay here and be my bride,” or “Do as I tell you,”  or “Say as I want you to say, and remain as unwritten upon as the day you came,” she held up the wolf’s eyelash and peered through and saw their motives as she had not seen them before.  And the next time the butcher weighed the meat she looked through her wolf’s eyelash and saw that he weighed his thumb too.  And she looked at her suitor who said “I am so good for you,” and saw that her suitor was so good for exactly nothing.  And in this way and more, she was saved, from not all, but from many, misfortunes.
But more so, in this new seeing, not only did she see the sly and cruel, she began to grow immense in heart, for she looked at each person and weighed them anew through this gift from the wolf she had rescued.  And she saw those who were truly kind and went near to them, she found her mate and stayed all the days of her life, she discerned the brave and came close to them, she apprehended the faithful and joined with them, she saw bewilderment under anger and hastened to soothe it, she saw love in the eyes of the shy and reached out to them, she saw suffering in the stiff-lipped and courted their laughter, she saw need in the man with no words and spoke for him, she saw faith deep in the woman who said she had none, and rekindled hers from her own.  She saw all things with her lash of wolf, all things true, and all things false, all things turning against life and all things turning toward life, all things seen only through the eyes of that which weighs the heart with heart, and not with mind alone.
This is how she learned that it is true what they say, that the wolf is the wisest of all.  If you listen closely, the wolf in its howling is always asking the most important question – not where is the next food, not where is the next fight, not where is the next dance? – but the most important question in order to see into and behind, to weigh the value of all that lives, woooooooor aieeeee th’ sooooooool?  wooooooooor aieeeee th’ soooooooool?  Where is the soul?  Where is the soul?
Go out in the woods, go out.  If you don’t go out in the woods, nothing will ever happen and your life will never begin.  Go out in the woods, go out.  Go out in the woods, go out.  Go out in the woods, go out.
Posted by Unknown at 10:10:00 PM