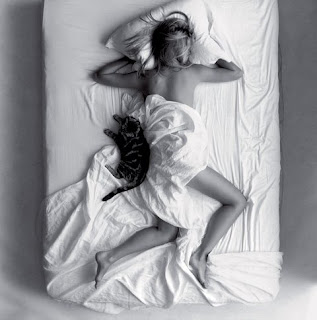 One of the best things for me about being so called semi-retired is it gives me time to sleep. You might think it would that I now have more time to paint and be creative. That's true too but only because I can now get more sleep. What I mean is, I can now get a healthy amount of sleep.

Ironically now in my 63rd year, my need for sleep has lessened. I'm awake by 5:30 a.m every morning! It doesn't mean I get up then, because, I don't have too and I usually can catch a few more snoraphonics before I get vertical for the day!

If I need to take a nap in the afternoon I do, but sadly that habit seems to have more or less left me, along with my ability to sleep in like the lazy teenager I once was.

When I was working for many years and then in 2009 while attending University full time for three years, I was usually very sleep deprived. This is the way it was, a good portion of my life. It's the way it is for most people.

I never saw my lack of sleep as a badge of honour, like some perceive it to be. My lack of sleep was in no way a reflection of my working harder. Nope, not all all. It simply left me with less mental, physical and emotional energy, and I day dreamed a lot about getting sleep. Mostly I could never get enough deep sleep. My creative life suffered.

When I worked traveling two hours one way, from where I lived I sometimes I had to sleep in my truck or had to get up at 4 in the morning and didn't get home until 7p.m. when I was attending school, an hour and twenty minutes away from home.

On one occasion coming back from work after working three twelve hour shifts I was so tired, I'd had a black out driving, because I'd fallen asleep at the wheel and got stopped by an R.C.M.P. Becuase I was weaving all over the road, he thought I'd been drinking. I assured him I didn't drink, as I am a recovering alcoholic. I told him I had just finished working three twelve hours shifts and that I was exhausted. Fortunately he let me off with only a warning.

Getting behind the wheel when you're sleep deprived can be just as dangerous as drinking and driving. This experience scared the livin' bejesus out of me, and I knew something had to change, and so it did. I quit my job and got another one. This time it involved working mid-nights, which is pretty darn gruesome, especially for women because you get even less sleep. Most women don't adjust well to midnight shifts. The plus side was no longer having to commute back and forth long distances to work.

Studying Fine Art in 2009 in a creative environment helped immensely. I was doing what I loved, making art full time. However I still had academic courses and assignments to complete. If I'd had more sleep, no doubt about it, I would have been better prepared, being able to think with greater clarity, improved my marks  and especially increased my creative output.

I would have enjoyed the overall experience much more as well, because I would have been functioning at 100% optimal health instead of about 65-70 percent most of the time, mostly going through the motions, often simply trying to get through my sleep deprived day.

In her book The Sleep Revolution Arianna Huffington succinctly and poignantly expresses why sleep is so essential and a great performance enhancer all based on scientific research.

I don't get the sleep I need often; hot flashes wake me up! And you are so right - it affects more than just your mood!