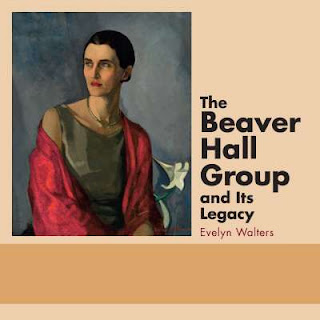 I am very interested in good legacy, particularly the legacy women leave. The women of the Beaver Hall Group left a legacy that most Canadians are unaware of including myself until this year.

This list of ten women are artists who, dare I say are to me much more significant to art in Canada than the Group of Seven, and were all members of Montreal's Beaver Hall Group.

Last week I heard Steve Martin on CBC talking about his love for The Group of Seven and recently curated an exhibition of Lawren Harris at the AGO, entitled The Idea of North.

Granted, some of these women in the Beaver Hall Group may have come from the same privileged WASP backgrounds, as the Group of Seven, but I would've preferred an exhibit of these women over Lawren Harris any day.

When I was attending my Canadian Art History classes in University, the Group of Seven was part of our Canadian studies. I was struck by how many students, in particularly young women held an opinion of disdain toward the Group of Seven, expressing their weariness of hearing about them and were critical for a myriad of reasons, but directly related to historical colonialism in Canada and all that it entails.

I was also included in that group of critics, with the exception of Tom Thomson. He was outside the Group of Seven, not that it mattered, but I just happened to be a fan.

To the women in the Beaver Hall Group, it mattered as it affected them in not receiving the same kind of public recognition as those privileged white male artists. The social conventions of the culture and time made it difficult to do so.
Certainly the same can be said for First Nations artists who were and are still ignored, marginalized and are the survivors of an attempted cultural genocide through that historical colonialism previously mentioned.

Canadian Art Magazine in it's critical review, entitled Whose Idea of North? Lawren Harris at the AGO written by David Balzer, Merray Gerges and Caoimhe Morgan-Feir gives an excellent and very accurate overview and criticism of the Lawren Harris exhibit. It accurately conveys the numerous reasons it falls very short in not measuring up to what should be expected from the AGO, which is insensitive and devoid of the any concern for the political implications of having such an exhibition, presupposing that it is representational of the Canadian North.

Not surprizingly, there once again exists an acute and infuriating irony in that certain Canadians continue to be willingly addicted and dependent on allowing Americans to define or usurp our identity as Canadians. Canada sadly continues to teach our American neighbours to do this. It is even more disturbing when you see cultural institutions intentionally and willingly doing this because the temptation of celebrity, power and money is just too great to resist. On other words it's expediently good for business. This is not a good legacy, and in fact it makes an already existing bad legacy, worse.
Posted by Unknown at 3:15:00 PM