Why Didn't She Just Leave? 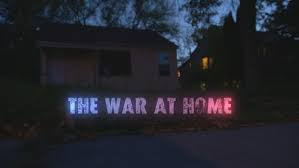 These days there is a constant deluge in media coverage about war and terrorism. Few of us think of domestic abuse as being terrorism, but in fact it is what's been called a personal terrorism  surrounded in a deafening silence in Canada and world wide.

When you find out that there have been more women murdered by their spouses than killed Afghan soldiers, among all the other looming statistics of violence against women, you realize we have an existing crisis that has reached a catastrophic level.

The following video is hard to watch , however it is such essential information to know and understand. There is so much misinformation, and misconceptions about this topic

Emmy Award winning film maker Shelley Saywell's documentary The War At Home acts as a check list for those of us who have been in abusive relationships and situations. It's an eye opening and disturbing reality that is in disparate need of both political and cultural change and a call to action.
Posted by Unknown at 6:20:00 PM

Email ThisBlogThis!Share to TwitterShare to FacebookShare to Pinterest
Labels: Personal Terrorism, Shelley Saywell, The Cycle of Violence, The War At Home

Domestic abuse (whether wife or girlfriend) is epidemic here too. Police and the court systems have so much of it to deal with, they've become numb to caring about it. But ignoring it won't make it go away or get better!

Amen to that Bev. The courts, judges, lawyers, police, and other institutions, the majority have their eyes shut. That's why we need to speak out, and continue to speak out. This is a powerful doc that I hope people will watch, even if it helps one person it will make a difference.