How About an Okpik on an Antler? 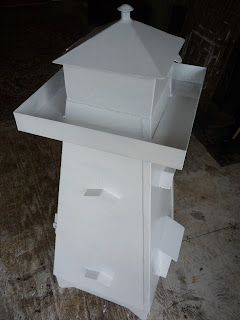 Lighthouses in Nova Scotia, and if you live by the sea, are the common proverbial iconography. Although I grew up visiting many lighthouses when I was a kid, and had a great fascination with them, I never saw myself actually painting them as subject matter.  Admittedly as an adult, I had a bias against this subject matter and was never interested in painting lighthouses.

People would tell me, "you should be painting lighthouses on buoys, they'd sell!" I saw the reproduction of the lighthouse as being rather kitsch like reproduced Okpiks on an antler (the name means "snowy owl" in Inuvialuktun).

Every place has it's icons. Sometimes these icons are so over exposed and even exploited for commercial purposes that it can cause one to become unappreciative of the imagery and can be seen as an exploitation of what it represents.

My perception of the lighthouse has changed over the years ever since I was asked to create two paintings of lighthouses for a friend who loved them so much. This commission gave me the opportunity to re-connect with my childhood memory and fascination with them again.

So I've been a commissioned to paint another lighthouse. This is the fourth lighthouse I have painted. Sounds like a big job right! Fortunately it's not a real lighthouse of actual size, that is in use. It's a replica of a three dimensional metal lighthouse, about four feet high. It will be used as a recycling bin for a Parrsboro Mainstreet project.

The paint I've been using has a lot of smelly fumes, so I can only work on it for short periods. I've placed it in my unheated back room so there is some fresh air, preventing me from getting high on fumes!

The majority of the labour is completed, in that the whole surface needed to be first covered in acrylic gesso, followed by three coats of rust and water resistant outdoor paint for metal. Once I am certain it is thoroughly dry, which should be tomorrow, I'll be ready to start the details of the images I know I'm going to paint onto the surface of the lighthouse. This is the exciting process of the project for me.

There are always lots of logistics involved in creating art. This aspect can be a satisfying part of any project and you know what comes next. After completing the initial necessary stage, then it can be a little daunting because you are now ready to engage in the rest of the creative process, and you don't want to make mistakes. A blank canvas can be intimidating.

An artist can't allow themselves to be overcome with these kinds of negative fearful thoughts. Otherwise you'd never attempt to create anything! Mistakes are all part of the creative process and you do your very best to avoid, learn from and correct if possible. What's important is to focus on the process not the final outcome.

Initially it's always best to ensure that the right materials are used in order to produce quality work. Often times this can be the most challenging and frustrating for artists. We can get impatient, and bored, especially if your ADHD! It can be tempting at times to take short cuts in order to start at the task at hand. However, it's definitely worth the time and effort to lay the ground work, in perhaps the seemingly mundane part of any project, otherwise the quality of the work is going to suffer. This foundation work is what I would call a standard of professionalism and it does involve paying attention to detail and must have an integrity.

Well I know I won't be painting any lighthouses on a bouy or an Opik on an antler any time soon, but maybe my next painting will be a snowy owl on an lighthouse. Just kidding...I think... 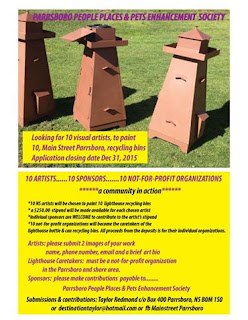 Isn't it funny how we lose our appreciation for the common until someone who is not from our area sees the extraordinary in the ordinary? :D Good luck with you painting!

That sure is true Bev. When we see something from someone else's perspective it often helps us change our own I think. That's a nice surprise. Goes to show we have to be appreciative and to keep an open mind. Thanks for your comment.

I'm looking forward to getting at my painting tomorrow. I changed my idea about my images that I'll be painting, which I feel really excited about. It's always good to take a little break from what your doing. A break can change your perspective too!