The first time I saw one of Edward Gorey's books I was a teenager and I immediately became a fan . I was crazy for his art, and the dark humour reflected in both his drawings, and his writing with his delightful sense of word play.

I believe it is a certain type of person that is drawn to Edward Gorey's work. One who possesses a sense of black humour, has experienced ennui, and understands the humour to be found in the tragic. I don't think I can do justice in describing Edward Gorey's work, I just know that he has been my one of my favourite artists ever. There is no one quite like him.

"Ideally, if anything were any good, it would be indescribable."
- Edward Gorey

One of my favourite Edward Gorey illustrated stories of his is, The Beastly Baby. The story of a rather ghastly and ugly very bloated baby, who's arms and legs are too short, and has two left hands. The child can only roll around on the floor. No one picks the baby up or shows it any kind of affection or love. The baby stays under tables and furniture, cutting up the carpet with sharp objects. The adults are wanting to rid themselves of the child, and commence to bring about it's demise. They first place the beastly baby into the sea, but the baby comes floating back to the shoreline, only to be covered in green slimy seaweed, no matter how many times they try, it continues to return to the shore, alive.

The last attempt finds the adults placing the child onto a high ledge a top a mountain, where they once again abandon him and they walk away. Shortly after, they hear a explosion of sorts in the far distance. The Beastly Baby finally met it's inevitable end, when it is carried off by a large bird of prey. The bird's talons caused the baby to explode.

I know it's a very dark story, and I can't help but feel sorry for the horrid beastly baby, and though the adults where really worse than horrid for doing such a cruel thing, to a defenseless baby, but nonetheless it is funny story, just the same to me, and I do think there may be a moral to be found in this tale.

Many of Gorey's stories do present some kind of enigma, dilemma, or tragic event that has happened or is about to take place, leaving the viewer wondering how this has happened and why. I would call them odd and mysterious enigmas, not to be understood but within our imaginations, and that we can relate to on some level perhaps, whether it be conscious or unconscious.

I think about another favourite entitled The Doubtful Guest. This undetermined peculiar creature arrives at a Victorian home wearing a scarf, in what looks like Converse tennis shoes. It stays for dinner but never leaves. I often refer to this story as being the thing that came for dinner, and wouldn't leave, because I think we can all relate to this thing. We've all had people arrive in our life or come into our spaces, and we just can't seem to get clear of them. 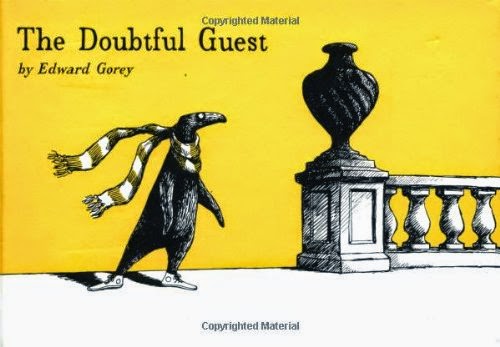 Pins and Needles stayed with me always and I especially fond of it. The following is the text that goes along with it. Gorey's wit, love of words and anthropomorphizing objects is very obvious in this drawing, and I love it so much.

Today is Edward Gorey's Birthday, and would be 90 years of age.

Email ThisBlogThis!Share to TwitterShare to FacebookShare to Pinterest
Labels: Edward Gorey, Pins and Needles, The Beastly Baby, The Doubtful Guest