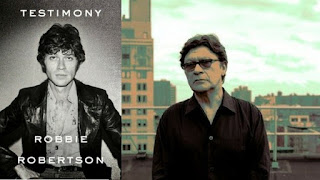 I never knew exactly or understood the historical connections between Indigenous, African American and Blues music though maybe I did on a intuitive level. Blues music has always been a big part of my life growing up til present day. My brother really introduced me to the Blues during the sixties through the music of Hound Dog Taylor and the House Rockers. He knew a lot about it historically, collecting so much music on the Chess and the Alligator labels, not to mention the many Blues magazines and books he subscribed to over many years.

And so a couple of days ago I was fascinated and happy to find out about Catherine Bambridge, being a member of a film company called Rezolution Pictures. She is a writer, director and co-producer of RUMBLE: The Indians Who Rocked the World, a feature length documentary that premiered at Sundance in 2016. This documentary has been described as being the "missing chapter in the history of American music."

Recently I've been reading a great new book by Robbie Robertson's, called Testimony, a Memoir.  He's among the many musicians I've long admired, featured in RUMBLE, and has always been one of my very favourite artists. I first heard him interviewed discussing his book on Q, then today for a third time on a repeat interview of Shelagh Roger's radio show, The Next Chapter.

I could listen to Robbie for hours, he's such a natural born story teller. The stories he tells in his book are wonderfully rich and really engage the imagination, transporting you right to where he was in his personal and musical journey and will make you laugh out loud.
Posted by Unknown at 7:41:00 PM

Email ThisBlogThis!Share to TwitterShare to FacebookShare to Pinterest
Labels: A Memoir, Rezolution Pictures, Robbie Robertson, Rumble, Shelagh Rogers, Testimony, The Blues, The Indians Who Rocked the World, The Next Chapter