The last year of University I enrolled in a course about the history of film in Japan . It was an eye opener and it very unexpectedly lead me to study war. In addition, another course I was enrolled in, I ended up writing a paper about women who were affected by war and were also artists.

What I'd learned about Japan in relation to the women and the Japanese culture was extremely educational. Considering Japan was the only nation in the world to have experienced nuclear devastation. Their personal sense of time, and identity was so poignantly affected like no other culture or any other people on earth.
I was incredibly struck by the personal inner strength of the Japanese women involved with early Japanese feminism, and at the forefront of anti-war protest.

During my studies I read Chris Hedges book War Is a Force That Gives Us Meaning, and this book helped me to begin to learn about the atrocities perpetrated upon children and women were and continue to be used as weapons of war.
In the Hot Docs film by film maker Tiffany Hsiung,  The Apology  documents similar atrocities, but wasn't perpetrated by the op-positional warring force, but by Japan's own government and army. It is the story of three women taken as children by the Japanese army and used as sex slaves, or were used as what was called "Comfort Women", to comfort Japanese soldiers during the war.

I vaguely remember reading this in one of the books I read about Japan, but like so many people we're completely historically unaware that this ever took place. It's such an important story about the extreme injustice and abuse of human rights of children and women used as sex slaves. 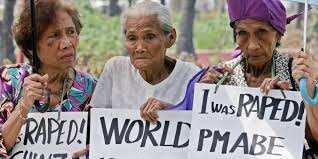 Email ThisBlogThis!Share to TwitterShare to FacebookShare to Pinterest
Labels: Chris Hedges, Early Japanese Feminism, The Apology, Tiffany Hsiung, War Is A Force That Gives Us Meaning