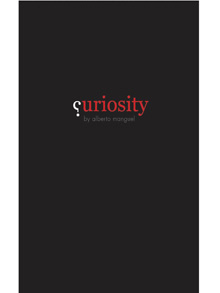 I am far from being an academic and scholar or even an avid reader, though I do make an effort to read especially philosophical or psychological books and books about creativity. I love life long learning.

Alberto Manquel is all these things, those he sees himself as a reader. I have never read any of his books and never even heard his name until yesterday on my favourite program CBC Ideas. Last night's show was about the listeners and the episodes that they most loved, and why.

What sparked my interest was a clip froman episode that featured Alberto Manguel. What was said about language being a form of love, and how stories is the language that defines "what we are", affirms "that we are" and how this is about our mutual perception, really struck me. I had to find out more about this dude Alberto Manquel.

There was mention of his new book creativity, called Creativity. From what I've learned, this book it's more about Alberto Manguels' curiosity about curiosity. I am of the opinion the creativity is curiosity, about asking questions and discovery. It greatly saddens me to see an educational system that is generally lacking in creativity, curiosity and questions, the opposite of what it should be.

As Einstein once said,  " He had no special talent beyond being passionately curious, we can say that there is no other avenue to cultivating creative work aside from impassioned curiosity. "

Alberto Manquel says " Schools and colleges have become training camps for skilled labour instead of forums for questioning and discussion. "
Posted by Unknown at 3:48:00 PM