The Man That Fell To Earth... Has Left The Earth


It`s a very sad day for those who love David Bowie. I remember just how excited I was in 1976 day I went to see my cultural idol that I loved, in the movie based on the 1963 science fiction book, by Walter Tevis, The Man Who Fell To Earth.

It`s been said that David Bowie spoke to the alienated and the outsider. This I believe to be so very true.

Film critic Drew McWeeny, also known by his pseudonym Moriarty, is a screenwriter, the former west coast editor of the Ain't It Cool News website, and put into words for me the very best description of how I felt about David Bowie, and his acting in this movie.

McWeeny stated that he felt that in this movie David Bowie wasn`t an actor playing an alien, but an alien playing a human being. David Bowie was so convincing, I wanted to believe he truly was an alien being persecuted and so misunderstood by the human race.

The fact that Bowie believed so much in himself, in spite of his own feelings of alienation and being an outsider, it is why he was able to convey and impart this message so well to others; especially for artists who often feel this way, alienated and outside the status qou. It was a message that said, through his example, it`s ok to be yourself, forget about what others think, celebrate your individuality, and who you are.

David Bowie was truly a multi-talented, consummate artist`s artist, with the creative ability to transform and transcend himself. He exemplified what it means to have an ever evolving creative vision.
He, was, is, and always will be very much loved, not only as an incredible artist, but as an especially good, kind, and gracious human being, a father, a husband, who will be deeply missed, forever and always remembered, in time and in space. 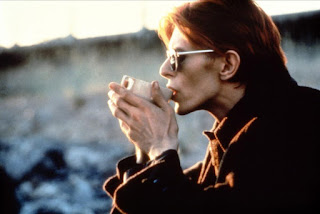 This video Lazarus so powerful, and so David Bowie. Rest In Peace David.

It is strange to think that such an icon is no longer around. Did you see the cover the Canadian astronaut did of one of his songs? The video was one of Bowie's favorites of someone covering his song. :)
http://www.moviefone.com/2016/01/11/space-oddity-astronaut-chris-hadfield-david-bowie/

"An alien playing a human being"... beautiful. I can't believe the Thin White Duke is gone. I love the way you described him, too: "He exemplified what it means to have an ever evolving creative vision." He really was out of this world, a great model of what if means to live a creative and authentic life. I'd like to share my favorite version of Heroes: https://www.youtube.com/watch?v=Sw1JnfyOoL8
Judith

Thank you for your comment Bev. Yes I feel very sad when I think of him being gone and dying with such a difficult disease as cancer. He taught those of us left behind so much about living, and really now, about dying.

Yes Chris Hatfield's cover David Bowie loved more than any other. It must have been very poignant to him and no doubt to Chris Hatfield.

I thought that comment so described his performance in the movie. Me either, it's hard to know he is gone. He always was so ever young and really epitomized youth, subculture, and those living on the margins.

Thank you Judith for your comment and for the link. I look forward to seeing this!