The Death of English? Amazeballs! 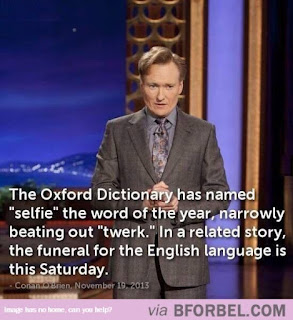 Artist's need and want to express themselves via the language of creativity. Human beings have an innate desire and motivation to communicate. Language takes many forms in non-verbal and verbal expression. I am always drawn back to my interest in language and communication because it embodies so much of who I am as a human being, and as an individual artist, which I believe are really one in the same.

Last week I heard a discussion regarding the correlation between music and language. To me this is an obvious no brainer. What came first I ask myself, which I think is really like the question about what came first, the chicken or the egg. There really seems to be no hard scientific fact to know this, however there is evidence and much speculation about how music can improve language, speech and communication.

The study of linguistics in University helped me to see how language is a living thing, that changes over time and not set in stone,  forever contained inanimately within dictionaries. Finding out recent entries into the Merriam-Webster dictionary, of such contemporary words like amazeballs, chillax, schwack, ginourmous, gription, conversate, woot, etc., might disturb the language purists. Your spell check won't even accept them, and I wonder if they will stand the test of time through continuous usage.

After listening to CBC Q with Shad about the topic of whether or nor the English language is being killed off inspired this post. I have highlighted the podcast.