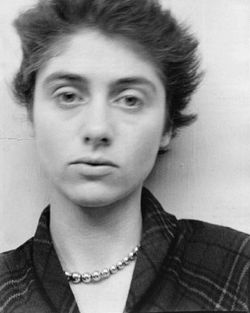 I am always of the opinion, if you really want to find out something about an particular artist, it is wise to go directly to the artist's words. However sometimes a movie is able to convey the essence of a person as a result of a creative collaboration between director, writer, cinematographer and actor. Director, Steven Shainberg's "Fur " is one such movie, part fictional and factual imaginary story about photographer, Dianne Arbus.
My reaction to this film was one of enjoyment and a strange sense of some how understanding a little bit more, the inner workings of the photographer's  mind and why she chose the subject matter of her black and white photographs that were powerful, disturbing, beautiful and laudable. Patricia Bosworth (Crom) was a friend of and model for Dianne and Alan Arbus. She wrote, Dianne Arbus: A Biography, which the movie was based upon.

Nicole Kidman did not look like the artist, however she transformed herself into a very interesting character that left the viewer  with perhaps  a kind of essence of the person, with a desire to learn and know more about who Dianne Arbus was, and about the work she created in her photography.

Both Kidman and Robert Downey Jr. acted their parts intensely and without flaw, compelling you to believe in these characters. There was an intensity in the acting through the eyes, as  Robert Downey  Jr's character Lionel, was masked seducing both Kidman's character and the viewer.
The cinematography was excellent with authentic 50s environment. The grays, black and white of the Dianne's somewhat generic apartment , conservative and restrictive environment and lifestyle, was  contrasted with the lavish colours and visual imagery of Lionel's upstairs apartment, that overflowed with a virtual feast  of visual oddities and strange collections, enabling  numerous imaginations for the audience.
There were exquisite close ups of certain scenes that caused the viewer to almost read what was going on within the thought process of Dianne Arbus through Kidman's portrayal of the artist.


After her divorce she suffered from depression and in spite of receiving therapy Dianne died, committing suicide in 1978, at the age of 48. After her death in the mid 70s, she was the first American photographer to have ever been exhibited at the Venice Biennale. The ten photographs displayed were described as, "the overwhelming sensation of the American Pavilion" and "an extraordinary achievement."
A retrospective at The Museum of Modern Art was held in 1972 which traveled throughout North America and it was estimated 7 million people viewed the exhibition. Another retrospective traveled around the world in 1973–1979.

Her legacy of work and contribution to photography, laid to rest, her fear of being known as a  "photographer of freaks." She had once expressed to her friend Patricia Bosworth she feared this is how she would be remembered, which in fact unfortunately this was in fact the case.

One gets the impression she was constantly trying to work through something in her photographs, with the subject matter being, those living on the fringes of society, dispossessed and marginalized. It's difficult to know just what was going on in her mind, and I do not presume to know. What I do know, is I love her work in it's rawness and honesty. I would include her photographs in the same tradition and category with  such greats as, Robert Frank, Henri Cartier-Bresson, Walker Evans  and Richard Avedon.

I think it is difficult to interpret with absolute certainty and knowledge of what her photographs are about, as photography is both an esoteric and rather elusive art. I  don't think it matters so much, as it is more about seeing and capturing that precise fleeting moment.

I find it interesting how photographers like Henri Cartier-Bresson's thoughts on photography, compare to Dianne Arbus. The sense of photography's estoteric and somewhat undefinable quality is evident and I would say perhaps even necessary.

Dianne Arbus may have referred to her subject matter as "freaks' as others have done, however I believe she had an admiration, respect, empathy and deep feeling for those's she portrayed through her camera lens. I believe she identified with them, had a repore and an affable relationship with those she photographed. I think this often went unrecognized because people did not want to see what was mostly considered the ugly and grotesque.

I believe there is beauty to be seen and found within the so called ugly. Dianne Arbus was successful at seeing and finding this beauty.


Pictures, regardless of how they are created and recreated, are intended to be looked at. This brings to the forefront not the technology of imaging, which of course is important, but rather what we might call the eyenology (seeing). - Henri Cartier-Bresson


The most difficult thing for me is a portrait. You have to try and put your camera between the skin of a person and his shirt. - Henri Cartier-Bresson, Photography Year 1980, LIFE Library of Photography , Page: 27

“What I'm trying to describe is that it's impossible to get out of your skin into somebody else's.... That somebody else's tragedy is not the same as your own.”
― Diane Arbus


“There's a quality of legend about freaks.
Like a person in a fairy tale who stops you and demands that you answer a riddle. Most people go through life dreading they'll have a traumatic experience. Freaks were born with their trauma. They've already passed their test in life. They're aristocrats.”
― Diane Arbus

“A photograph is a secret about a secret. The more it tells you, the less you know.”
― Diane Arbus

As time passes by and you look at portraits, the people come back to you like a silent echo. A photograph is a vestige of a face, a face in transit. Photography has something to do with death. It's a trace. - Henri Cartier-Bresson

The thing that's important to know is that you never know. You're always sort of feeling your way.
Diane Arbus

Interesting post. Artists sure do go through their experiences don't they (sort of an understatement)? I think about those who have so much trouble maintaining a sense of balance as they seek the great, excellent, and beautiful in life through their art form.

I think she was a complex and amazing photographer! I enjoyed the movie as well.

Betsy thank you very much for you comment. After reflecting I think most people on this earth go through so much trial and tribulation, few escape this. Artist are fortunate I believe, because they quickly come to find out that creativity is a solace that heals and acts as a refuge in the mists of many turbulent and raging storms. It has been this for me and for that I am so grateful!

I believe she was a person that thought deeply about things like most artists. You know when I was in New York I only saw maybe one photograph of hers all the rest were the usual Walker Evans, Robert Frank, Bresson, Stieglitz etc. Still the SOMO you know what I mean in the museums! Thank you for your comment Indigene!