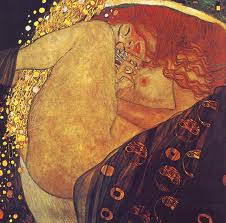 The film about Gustave Klimt, the primary Austrian Art Nouveau painter was written and directed by Raúl Ruiz. "Klimt " was in my opinion one of the most boring, hard to follow, frustrating and uninteresting films I have seen this term in my Art History class.

Perhaps I just didn't get the film for reasons unknown to me. I tired of attempting to figure what the director's objective was in writing this "story"  about Gustave Klimt, it remains rather enigmatic to me. I suspect because it was considered an Art House film being experimental and not intended for a mainstream audience but was seen as an art work in and of itself.
I did find John Malkovich's performance compelling and convincing and I think this held my interest in spite of my ongoing hope that the film plot would improve, which it did not.


I knew little about Gustave Klimt, and what I did know, I'd forgotten from my earlier studies of art history at NSCAD. I always found his art visually lush and appealing and very different from what was being produced within the academic tradition at this time.

Beginning his art education in 1879, at the very early of 14 years, over a period of 7 years, at the School of Arts and Crafts in Vienna, gave him the foundation for his hyper-realistic renderings. He was considered a great talent by his professors and left to work on his own on decorative projects.

Klimt was inspired by Japanese art and the contemporary English painter, Sir Edward Burne-Jones (1833-98) who was greatly involved with the work of William Morris whom had studied architecture and later as a painter under the influence of poet and painter Gabriel Dante Rossetti.

Klimt was responsible for the much of the development and transforming and bridging the traditional toward Modernism and the figurative toward the non-figurative and in particular depicting sexual imagery.

Although Gustave Klimt was in my opinion a great artist, it appears he was most successful as a designer in the applied arts and had been primarily a decorative painter in the late 1800's decorating Vienna's Kunsthistorisches Museum in 1891, however he dominated the art scene in Vienna and his influence on the Vienna Succession ( 1898) as one of it's founders becoming it's first president. The objectives of this society of artists had as it's primary purpose to allow for the opportunity to young artists to exhibit their work, drawing  the best of foreign artists to Vienna and the publication of their own magazine entitled Ver Sacrum.

His early success was attributed to lucrative commissions from the wealthy industrialist Nikolus Dumba and in 1892 the commissioned work from The Ministry of Culture and Education to decorate the hall of the University. His allegorical panels entitled, Medicine and Jurisprudence, painted for the University Faculty, proved very unpopular, as they were deemed perverse and pornographic.

He quickly came to the realization he would not be able to work within the confines of this kind of institutional restriction that limited his artistic freedom. He had a enormous effect on the Expressionist painter Egon Schiele and Oskar Kokoschka also an Expressionistic painter.
Klimt's paintings are what he is often known for however his drawings were beautiful and exquisitely rendered with precision of contour and gestural line. 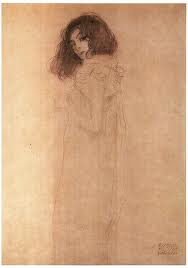 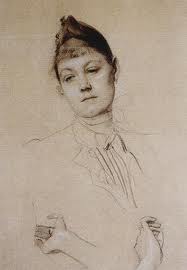 I have never had the opportunity to see any of Gustave Klimt's work, but I certainly hope to one day in the future, as he is a remarkable and wonderful artist.

He is a personal favorite of mine, also! I found the movie, lacking as well and I would love if they had focus more on his art, rather than his personality. But this blog post was an excellent review of him! I love coming and reading your blog posts! :)

This is really an informative blog. Thanks for sharing with us. Painting classes in delhi

Gustave is a favourite of mine too, he was an amazing artist. Thank you so much Indigene. Your comments are greatly appreciated and motivate me to keep writing. I've fallen behind in my posts the past few weeks.I've been crazy busy lately finishing up school with last day of classes April 5th and graduation May 14th! I'm waiting to exhale!

Thank you very much for your comment Javi and for dropping by I very much appreciate that! Catherine