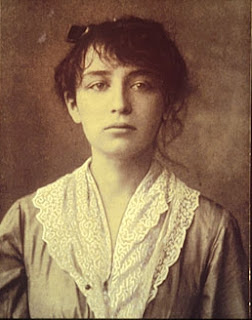 The 1988 French film, directed by Bruno Nuytten entitled, Camille Claudel, was about the 19th century sculptor, originally based on the book by Reine-Marie Paris, the grand daughter of Camille Claudel's brother, Paul Claudel , a poet and diplomat.

I was impressed with the film because it was generally factual and historically accurate with a sense of authenticity, that convinced me of the characters whom were very well acted by Isabelle Adjani  portraying Claudel and Gerard Depardieu who was Rodin. The cinematography was excellent as was the costuming.

I had never heard Camille Claudel's  name prior to seeing this film, and so I appreciated learning about what a talented and gifted artist she was, who unfortunately seemed to have been in the shadow of Rodin. Unfortunately due to the historical time period she lived, along with the lack of support from her brother, her mother, along with a society and culture in general, that did not encourage women to become artists.

Being rediscovered  by Rene Marie Paris in the 1980s, Camille Claudel may indeed have gone unrecognized  to this day. It is wonderful to find out about such an artist and it is in many ways bitter sweet  to realize the travesty of being unrecognized for so many centuries, such women as Camille Claudel who seem to have disappeared into the annals of history.

Unfortunately for Camille she came under the tutelage of Rodin at the very young age of 17, becoming not only his student, but model, assistant and lover. Regardless of Rodin's influence, Claudel was considered a talent within her own right and was called by novelist and art critic Octave Mirbeau, as " woman genius".

Claudel's involvement with Rodin was not an egalitarian relationship in that, Rodin was her teacher and employer, 24 years her senior and he was romantically involved with a teenaged and impressionable young woman. This was a disproportionate balance of power and control. It is my opinion the situation created a codependent relationship, proving to ultimately lead to her downfall as an artist and effected her emotional health. In 1888 Rodin and Claudel began working and living together in the rented studio residence of the Clos-Payen-Folie-Neubourg. Camille was 24 and Rodin was 48 years of age.

A related issue I think is often perhaps over looked, but an all to often a concern for women, particularly those of us who choose marriage and children, that being, our careers as artists can take a back seat, not necessarily due to co-dependent relationships but simply our familial relationships and the responsibilities entailed.

One can only assume there must have been a strong element of control imposed upon Camille throughout much of her life, considering she was involuntarily committed to an asylum at the age of 45, by her own mother who refused to approve of her daughters release, in spite of being considered to be in good health. Perhaps because of the fact that Camille's mother's family came from a long line of priests, she was a strict and rigid adherent to Catholicism; this may have contributed to her mother's disapproving and controlling nature.

Camille Claudel was a victim of the historical time period and of the social mores of the 19th century. In spite of her father's support, encouraging his daughter's artistic pursuits, it apparently was not enough to avert her institutionalization due to her supposed mental instability.

The film portrayed Camille's mother as jealous, resentful and hostile toward her daughter's pursuing sculpture as a career choice, although her father was very supportive and encouraging. Perhaps Camille's mother was also very controlling of her husband as well.

Regardless of circumstances Camille's courage, determination and conviction toward her monumental works resonated much feeling and passion that moved and inspired the soul, including that of Rodin's. Her style contrasted emotionally  from Rodin, although thematically perhaps  their sculpture was similar. Rodin's work was more intellectual, as opposed to emoting from his personal life. Claudel's sculpture was lyrically narrative and full of life. 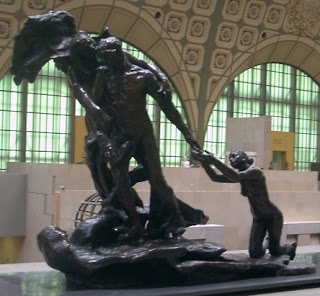 It is very unfortunate much of her work was destroyed by her own hands prior to her hospitalization. 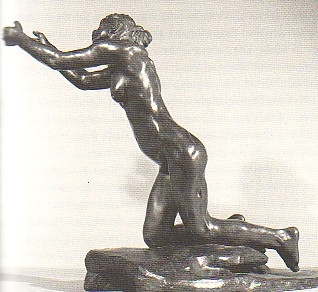 Camille not only competed with the best sculptors of her day, she surpassed many including Rodin I believe, and if she had been alive today would surely have received the recognition she so deserved.

Great read! I wish someone would put together an exhibition for her, of whatever art work, letters, photos, etc. There are so many intricate layers to her life! Thanks for sharing this.

Thank you very much for your comments Indigene.

Yes, she is an amazing inspiration. I wish that as well. It seems so few people know about her.