The film by Carlos Saura, Goya In Bordeaux, though cinematography was powerful, beautiful and interesting in parts, it left me with more questions than answers , due to the fact I found it to be lacking in information. I would have appreciated either an actual theatre performance or a film based on Goya's paintings, rather than a combined attempt at a somewhat strange low budget theatrical like production and film, that was more about the man, his spiral into mental instability and his romantic love interests which always appear to be emphasized in movies about artists. These combined aspects I found rather confusing and more about the cinematography than anything else, although I very much appreciated the actor who played Goya, and the remaining cast members as I think they were all well chosen. I particular loved the authentic and historically accurate costuming, the element of dance and use of music.

I would like to have seen more information about his very early development and life as an artist, considering he began his apprenticeship at the early age of 14 years, with Francisco Bayeu designing tapestries and later with royal court painter Anton Raphael Mengs. I am curious to know why he fell out with Mengs. Interestingly in 1763 and in 1766  Goya was denied entrance into the Royal Academy, I would also like to know why.

The emphasis on Goya's mysterious illness throughout the movie which left him introspective and withdrawn but with no explanation of it's possible cause, but it has however been speculated by some, that he may have actually suffered from Meniere's disease which would have caused his hearing loss vertigo and tinnitus or perhaps was poisoned by his paint pigment which may have caused a series of strokes and dementia.

Goya's 42 tapestries designs I would like to know more about, as I believe these played a part in the historical story of Spain that Goya's work encompassed.  I found it interesting in my research to learn  that his appointment as a member of the Royal Academy and his commissioned painting done of Charles 1V of Spain and His Family, the artist is looking out as a viewer on the family, as if in mocking judgement. 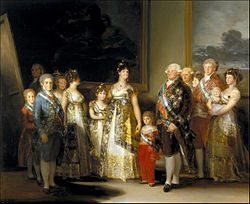 This family portrait is very unflattering and may indicate Goya's disillusion and disdain  for the monarchy and it's corrupt government.

The Black Paintings, which are extremely compelling and disturbing in nature, reflecting Goya's desperate state of mind mentally are both powerful and revealing. The film did an excellent job in imparting this to the viewer and was very effective. Interestingly it has been claimed that these were not produced by Goya according to an controversial article written in the New York Times. 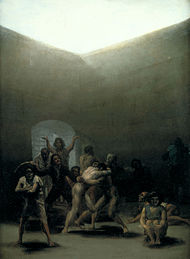 In Goya's painting, The Yard of Lunatics expresses a terrifying vision of mental illness unlike what was depicted by previous artists on this subject matter and was done at the time of Goya's own complete mental brake down.

Another film about Goya entitled The Secret of the Shadows addresses what director David Mauas refers to as, micro signatures found in several of Goya's paintings.

There is much mystery around Goya and perhaps this is what is compelling about the artist and his art, as he and his work is left for us to interpret what it is he says to us and what is essentially Goya. Today however he is considered the last of the "Old Masters" and the "Father of Modernism".