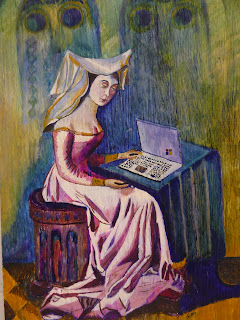 As a mini art project for my class, Women, Art and Society, I chose to do a painting of someone considered perhaps the first professional woman writer, Christine de Pizan,  whose thirty year career spanned from 1399-1429. Born in 1357, her family soon moved from Venice to Paris where her father, Tommaso da Pizzano was hired to work as the royal court astrologer for Charles V as well he was a Councillor of The Republic.


Christine came from a very privileged and educated background where both parents  in this writer's opinion imparted a rather unusual egalitarian sensibility to their daughter. Her scholarly mother and father were very well educated at the University of Bologna. Christine was encouraged to get an education, studying the classics and humanities.


Marrying at the young age of 15 years in 1380 and after the death of both her father and her husband, Etienne de Castel, Christine found herself without income, widowed and having to support three young children, along with her widowed mother at the age of 25. Sadly one of her children died in childhood.

In order to make ends meet she began writing romantic poems, which found great favor with those among the wealthy court, and increasingly got much recognition . She would receive compensation, in the form of perhaps a piece of cloth or jewels for her work. This was commonly practiced with male poets but unheard of with poets that were women.

Her most notable and successful work, The Book of the City of Ladies was written using French vernacular, published  in 1405 , having great philosophical depth, and gave an account of the history of women, using Boccaccio De Mulierilous Claus ( Concerning Famous Women ) as source material. Her writing was very cutting edge, in that she challenged the social and cultural mores of a misogynistic society. It was written in response to the well known popular writers of the day.

My egg tempera painting depicts Christine de Pizan at her laptop writing away. I know this is  incongruous imagery, however it is my attempt to convey that in spite of and perhaps because of the fact she lived so long ago, she still commands the attention of  contemporary feminist artists in light of existing misogyny and basic human rights still being very much at the forefront of the feminist mindset in today's world. Christine de Pizan was a kind of warrior and one of the first feminist writers who paved the way for women in the future, and she no doubt would be very much internet desktop publishing savvy!

I love this painting-- it's great! I think the anachronistic imagery really gives it an edgy surprise.
Judith

I meant to say on my post to your blog, your name reminds me ofArtemisia Gentileschi's painting of Judith! Without out the beheading part! Judith Joseph, a name with great strength I'd say!