I was asked to write a guest blog post for my gracious, beautiful and very talented friend Julia Speer , who has a wonderful site, Sage Soul Sisters. 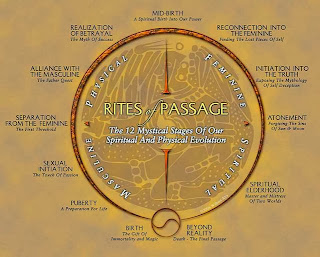 Having reached the age of being a Crone, I decided to write a post about rites of passage, and examine what the term means to me personally. I believe it is about transitional change.  I continue to learn what this means to me, and hopefully I will always welcome change with courage.
In particular, I strongly identify with traditional First Nation people's outlook, and philosophy regarding rites of passage.

People are always changing. We are either moving forward, or regressing, regardless of  the pace or situation. The one thing that stays the same, is that life is always full of transition, from birth to death.
My life transitions are particular to me of course, but like most folks, many did not come easily, were beyond my control, and some were of my own choice, and decision.

I don't think it much matters what my experiences were, so much as what my attitude was when they happened, and what I gleaned from these rites of passage. The lessons learned, helped me to become a better human being. I always reflect and paraphrase what I heard Angela Davis say during an interview, when asked about her time in prison; when you go through difficult times she stated, these times either break you, or you get stronger.

My attitude toward rites of passage was, and is everything. I had to find the positive, courage, faith, and trust. When I couldn't find these within myself, I borrowed them from some one else. I had to leave put my false pride aside, reach out to others for help, and put my faith in God.

I certainly understand that much of my behaviour was already hardwired in my personality due to my parental upbringing that determined in part, who I would become as an adult woman.

I have had many rites of passage, and I am still connecting these to myself, as a spiritual being, having a human experience, who has recently transitioned into being a crone, now reaching the age of sixty. When I think about this, it causes me to reflect over the course of my life up until the present, and to take a kind of inventory of these rites of passage.

I have listed the most significant rites of passage in my life.

I hesitated a bit in making this list, as part of my post being so personal, and to some may seem very negative. Yes it's true, much of it was negative, but in retrospect, all of these experiences, and events have helped me to become, and to accept who I am mind, body and spirit. I choose not to let my rites of passage define me in a negative way. I became a resilient, whole person, that learned to take responsibility for my own health and happiness. I've learned to accept the things I can not change, to change the things I can, and to know and discern the difference.
I am grateful for each, and every day of my rites of passage, for my contented, happy, sober life. Especially I am forever grateful to those who helped me along the road. 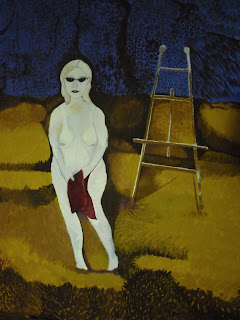 Self-Portrait/ Artist As A Crone

Cathy, just read your blog on that ladies site (can't remember her name, and don't don't how to get back there without leaving this wee comment box...!) I have to say - over the years, our paths have occasionally crossed and intertwined, perhaps not often enough, but they were memorable for all that they were precious! You always bring a smile to my heart, even at those times when our butts were both scraping along the bottom-most part of our lives! Maybe even more at those points, I think. Thank you for the laughter, the silliness, the merriment, the caring that you always bring to those of us lucky enough to be in your orbit.....Love you, Jeanne