Today while doing research for my Advanced Art History class about Michelangelo I found this very and fascinating PBS program about him based on the research done by well known Art Historian and Restoration expert Antonio Forcellino. It was riveting and informative changing my outlook regarding Michelangelo's involvement with the Catholic Church. I had always assumed he had been a devout adherent to the tenants of the Catholic Church.There has been so much written about " The Divine Artist ", but difficult to decipher fact from fiction. This I believe to be the most compelling information I have found that makes one admire the man even more.


Comparing Irving Stone's, classic Hollywood epic, The Agony and The Ecstasy  to Michelangelo Buonarroti's actual life is rather like comparing apples and oranges. One is about the production of a movie based on some historical fact however generally it was very much a fiction, depicting some historic romantic realism, starring American and  English Hollywood actors. Although Irving Stone went to great lengths to produce a film that he perhaps hoped would be as factual as possible. Unfortunately this was superseded by the  glamor and glitz of Hollywood. The film touched on various truths about the life of Michelangelo such as some of the details of his early life and work but failed to examine he's spiritual beliefs that were formed by his family's unsophisticated Catholicism. In later years his work was Christ centered increasingly focused on having a relationship with God rather than the institutional church.
In my opinion Michelangelo's spirituality is the most significant and relevant characteristic that reveals whom he was and this is poignantly reflected in his art. The Agony and The Ecstasy fails to bring this to the surface, settling for the Hollywood version that portrays the artist as a rather self-absorbed, tormented, iconographic figure that appeared almost super human. I do believe Michelangelo was complex individual, that struggled within the restriction and dogma of the Roman Catholic church and an authoritarian papacy. The fact that he and his family attended the Franciscan church at Santa Croce, I believe was a great influence spiritually, if he followed the tenants accordingly to Saint Francis who always preached faith through Christ was the way of salvation, not anyone or anything else. Michelangelo's apparent and intimate relationship with poet Vittoria Colonna as well Michelangelo's involvement with the Spirituali, which existed between 1510-1560s, the publication and circulation of the book, " Benficio di Cristo", "The Benefit of Christ's Death" all contributed to his being caught between the powers and capriciousness of the Medici family and the Papacy.

There was little to no mention in Stone's film regarding the depth of Michelangelo's spirituality, why he was so conflicted and how spiritual symbolism was reflected or why it was so important in his work. As in the sculpture of Moses, there a various anomalies such as the law giver who is looking away from the celebrant,  who appears to be is searching for the light through direct contact with God, not the priesthood. 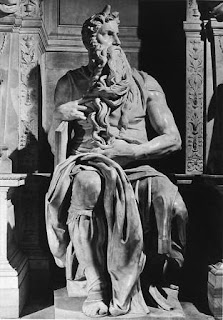 In Michelangelo's own tomb was to be portraying himself as Nicodemus which was representing those Catholics who were covertly sympathetic with the reformed theology that emphasized grace, which God sent through faith and sought the renewal of the Catholic church. 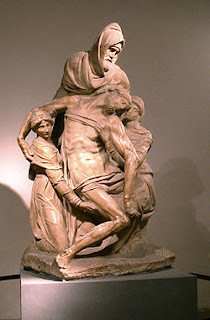 I do not believe that Michelangelo was "The Divine Artist", nor do I believe he would consider himself to be. I think he was a gifted and well trained artist who simply wanted to live his life as a simple follower of Christ in a tumultuous time in history that made it very difficult if not next to impossible because of the power between Church and State. I think much of his confliction and how Michelangelo saw himself can be summed up in the story of Nicodemus..

Email ThisBlogThis!Share to TwitterShare to FacebookShare to Pinterest
Labels: Antoino Forcellino, Michelangelo, PBS, Secrets of the Dead, The Divine Artist

A lot of artists/musicians throughout history have had a less than desirable relationship with the church in power at the time, as well as the royalty or aristocracy who were their patrons. Beethoven was a prime example. He contributed greatly to bring bringing about a change for the better in this regard for artists.

I have some new music on both of my blogs you might enjoy!

Thank you Betsy. I will do that when I get home from school tonight! Looking forward to it!