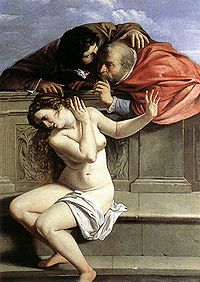 I think like many women who first find out about Artemisia Gentileschi  find it to be a very exciting discovery to learn of such a gifted, talented and ground breaking woman, who is like a beacon of light in a dark world of male dominated artists in the Renaissance. It is empowering to know of such women who are still very relevant to contemporary artists today. Wouldn't be wonderful if one could go back in time briefly to meet artists such as Artemisia. The courage and strength necessary for her to survive and thrive as an artist is hard to imagine.

In both my Art History classes we were to watch the Merlet film entitled, "Artemisia" and then discuss it in class. Merlet refers to herself as a feminist. Unfortunately this movie did nothing to celebrate who Artemisia was, her art, her accomplishments as an artist, and did nothing to forward the cause of feminism in my estimation. On the contrary the movie falsified and distorted her life and history, focused on fallacious truths, loosely based on her life and upheld those who victimized and abused her. Her rapist and painter and teacher Agostino Tassi, never confessed to his crime, nor was Artemisia in love with him and never recounted her rape accusation toward him, as portrayed in the film. This kind of untruth and distortion re-victimizes and perpetuates a stereo type  and discrimination against women artists as well does great injustice toward both genders within the context of art history and outside of the art world.

When Artemisia was first released it was purported as being a true story and later this claim was recounted. Regardless, the good news was finding out the truth and learning the real story found in other films produced without the fan fare of the big budget Hollywood blockbuster movie produced to appease the masses for nothing more than commercial  purposes.

Nonetheless, all these centuries later, Artemisia's voice is far from being silenced, nor her life lived in vain, knowing that contemporary artists are rallying to educate and learn about Artemisia and many of the woman artists like her. It is a heartening story and history indeed, that needs to be told..

The site and movie produced by Ellen Weissbrod, A Woman Like That, champions Artemisia and the issues surrounding her and the relevancy to contemporary woman artists.. 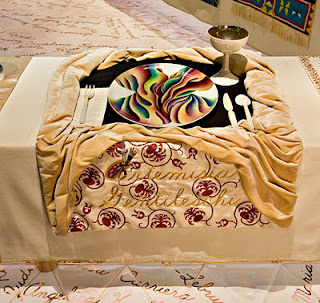 When I contemplate on Artemisia's life and work and other female artists  I can't help but reflect on Judy Chicago's incredible installation, "The Dinner Party" found in a permanent home at the Brooklyn Museum in New York. It makes me very grateful and indebted to such ground breaking feminist artists like her, who pave the way and share their knowledge with others, so we can understand the under-recognized past history of women artists, their significance and profound  role.

Perhaps one day in the near future there will be another women, who will produce another film, telling the accurate story about Artemisia Gentleschi, the most important artist after Caravaggio. Unfortunately the   Merlet missed the opportunity to do so.