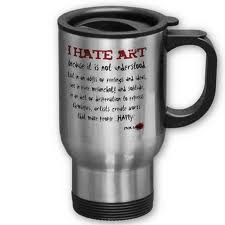 Michael Snow
Michael Snow considered himself misunderstood by the public and his critics. He was considered provocative but some, choosing random subject matter, transforming art objects, regardless of what medium he used.
Many artists are misunderstood, nothing new, however some artists perhaps intentionally keep the public confused or don't feel the desire or obligation to inform their public audience. This is a personal choice, however if an artist does not make any effort to explain their art practice, I would conclude chances are, the audience will be confused and not comprehend what the art is about, or the artist's perspective.
I don't live in the artist mind, God knows, I have a hard time to live in my own mind. I do very much appreciate an artist making an effort to clarify the ideology and reasoning behind the art. When this does not occur, art and artist are misunderstood leaving the audience to fill in the blanks usually based purely on a subjective opinion alone.
Michael Snow was an artist of the 50s and 60s generation the decade that provided many artists a way to re-evaluate traditional ideologies and discourse. The artist now had the opportunity to re-define and reconstruct their own art.
In his reading " A Lot of Near Mrs." he does little to clarify or dispel what he considered misconceptions regarding his work and his intention. It could be said, he was simply being provocative, playing devil's advocate, regardless I don't think this was helpful to any one but Michael Snow.
I do appreciate and recognize Michael Snow's ideas and contribution to conceptual art and the art world generally, I just not one of his fans. I think he lived too much in his head, had others do his work and most of his work leaves me cold.
Jen Grant
I don't want to limit the word, artist by restricting my choice, listing only visual artists, so I decided I would include musicians.
My opinion is sure to piss someone off who thinks Jen Grant is amazing and wonderful, but I can not stand listening to her, ever. Yes, she may be a fairly good song writer but as far as being a singer, definitely not. She has a affected way of singing that I find so annoying I have to shut the radio off, immediately. What can I say, it's terrible.
My mother was a singer, I come from a very musical family, on both sides. My mother always said that a person who sings well, does not have to use gimmicks for affect etc., to try and convince those listening that they can sing, it just becomes very apparent they are trying to make up for lack of talent and training. It just becomes annoying to listen.
Erin Costelo
Here's another musician I dislike and I have to turn off the radio, same reason as above. Drives me crazy to listen and unfortunately she is a great piano player and a talented song writer in my opinion. I think she should stick to piano playing and song writing.
I hope I haven't offended anyone too much, that wasn't my intention. It's just my opinion, no one has to agree. You know what they say about opinions.
Last but not least here's Vomit Art. I don't like it. Not to hard to figure out why.
vomit art
Posted by Unknown at 6:13:00 PM

I question your premise that an artist must explain themselves to be understood. Effective art should be able to stand on its own merits. For example, suppose 500 years from now someone at a rummage sale finds an object d'art among other random things. Would they recognize it as art? Would they be able to understand it on some level without knowing the artist, its country of origin, or era of its creation. Isn't there something inherent in artistic products independent of context?

I would agree, for me personally some art can stand on it's own, and this is rather dependent, I would suspect, on whomever is doing the viewing and whom is producing the art. Some art and artists regardless of explanation will never be understood. Personally I can only speak for myself, in that I do feel a desire and need to consider who my audience is if I am going to present my work. I greatly enjoy making a connection with my audience because my life and my art are not compartmentalized, living independent from one another. Art and life for me are in direct relationship and each informs the other. Both in my opinion, are about relationship to these three things; myself, others and the Creator of my understanding.
Thank you Chad, once again, for making me think! Your comments and input are always very much appreciated. Catherine