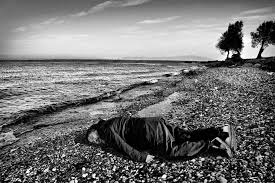 I first heard the name Ai Weiwei during a sculpture class at Mount Allison University, about eight years ago. I was so drawn to this artist because of his commitment to social justice and peace. If there's any purpose that artists serve, it's my opinion, that there can be no higher purpose than this, considering the state of our world, full of racism, poverty and the violence of war.

It's difficult to maintain hope for humanity in the contemporary world, however Ai Weiwei imparts hope by constantly affirming the power of the individual to speak out, and to stand up for truth, by following the open path of love, associated with what is, helping us to try and process what is happening in the world of humanity that's so difficult to fathom and understand man's inhumanity toward one another.

I've heard and seen a number of interviews and documentaries about Ai Weiwei, and each one increasingly moved me. The interview I heard recently on the Current, regarding his new film called Human Flow, is so profoundly insightful and simultaneously disturbing, conveying an intimate and riveting perspective of the reality of 'what is' happening with those who are fleeing war and violence on a global scale, that convicts the conscience.